The Victoria youth jail was more than 80 per cent full on the weekend, with 20 youths held in custody — including a teenage girl whom Victoria police refused to keep in their lock-up.
Lindsay Kines And Louise Dickson Jun 17, 2014 9:43 PM

The Victoria youth jail was more than 80 per cent full on the weekend, with 20 youths held in custody — including a teenage girl whom Victoria police refused to keep in their lock-up.

The union representing correctional officers said the incident highlights ongoing concerns about the government’s plan to close the jail this year.

“We’ve said all along that the [counts] go up and down,” said Dean Purdy of the B.C. Government and Service Employees’ Union. “So now the count at the Victoria Youth Custody Centre is 20 for a jail that has a capacity of 24.”

Purdy said the girl was taken into custody on Friday night, but Victoria police refused to hold her in their cells because they lack proper facilities for youth.

“I guess the big question is: What’s going to happen in the future when the Victoria Youth Custody Centre is closed and the only alternative is to place her in city cells?” Purdy said.

“This is a perfect example of how our youth will fall through the cracks of a broken system and why it makes so much sense to keep the Victoria Youth Custody Centre open.”

The Ministry for Children and Family Development confirmed Monday that the count for the Victoria Youth Custody Services was 20, including the teenage girl.

“Although this number is high considering the average count was 15 in the entire past year, periodic spikes do occur,” said a ministry spokesman.

The ministry announced in April that it planned to close the jail due to the declining number of youth in custody. Minister of Children and Family Development Stephanie Cadieux said the closing would save $4.5 million a year and offset an equivalent loss of federal money due to falling numbers.

Victoria Police Department spokesman Bowen Osoko confirmed Monday that the girl arrested Friday was remanded in custody and transferred to the youth jail.

“The VicPD cells are not the right place for youth, let alone female youth,” he said. “The chief was really clear about his concern about the closing of the youth correction centre, and those concerns are evidenced every day.”

This case and the spike in the number of youths held at the youth custody centre show there’s an ongoing and significant need to keep the centre open, said defence lawyer Richard Schwartz.

The youth custody centre still holds girls, but only for short periods, said Schwartz, who is representing the teenage girl.

“I spoke to the police and ensured that [her] adjournment would be Monday so she could be held here and not transferred to Burnaby. If I’d said Tuesday, she probably would have been shipped over there,” he said.

Schwartz, who has specialized in youth justice for more than 30 years, said he had no idea why the number of youth held in custody at the detention centre had increased so quickly.

“Those kids could have come from up-Island or they could have come in from Prince George or from Burnaby for administrative, case-management or security reasons,” Schwartz said.

“That’s one of the advantages of having more than one institution. It allows kids to be moved around in their best interests. But it certainly is an example of how the numbers can change without warning.”

The ministry said the jail’s count dropped to 16 boys and no girls on Tuesday.

Youth on short-term remand and serving sentences of fewer than seven days will continue to be housed at the centre until it is fully closed, a ministry spokesman said.

“All of these youth can easily be accommodated by Burnaby Youth Custody Services, which includes excellent programming for rehabilitation and counselling.” 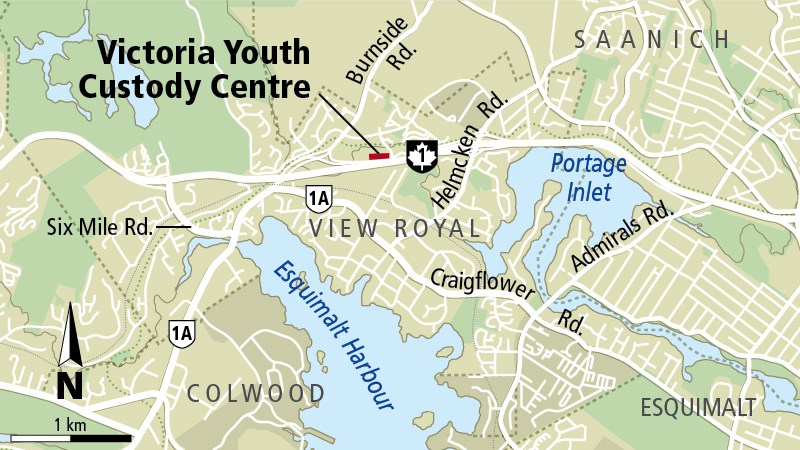 Victoria officers who delayed breaking down door of suicidal man did nothing wrong: IIO
Feb 7, 2023 4:00 PM