Victoria establishment in running for top Irish pub outside Ireland

The “craic factor” is one of the reason’s Victoria’s Irish Times pub made a list of the 10 best Irish pubs outside of the Emerald Isle.

Craic, an Irish word for fun, merriment and mischief, was one of a number of elements people were asked to consider in nominating public houses around the world

Victoria’s Irish pub, opened in 2004, seems an appropriate choice — especially since it shares a name with the Irish newspaper that organized the contest. Searching out the pubs was part of the Irish Times newspaper’s Generation Emigration project, aimed at Irish people who live outside the country.

The Irish Times — the pub, that is — is on a roster that includes the likes of Bubbles O’Learys in Kampala, Uganda; the Drunken Poet in Melbourne, Australia; and Finn McCool’s in New Orleans.

(While the newspaper gives the Irish Times pub’s location only as Vancouver Island, a comment on the online story clarifies that it refers to the pub on Government Street in Victoria.)

The contest attracted about 1,500 entries from 41 countries.

Nominators were asked to look at pubs’ commitment to Irish food, culture and sport, and their contribution to the Irish community beyond Ireland’s borders.

They were asked, in effect, to write “a love letter” to their Irish pub of choice, according to the Irish Times newspaper.

Researchers will visit each of the 10 short-listed businesses before the newspaper’s panel chooses a winner in late March.

Victoria’s entry came from Josephine Higgins Moran, a visitor who said she stumbled on the Irish Times pub while in the city a number of years ago.

“We had done the touristy things, tramped its streets all day and there it was, the Irish Times. Modern yet tastefully decorated. The oak bar curved beautifully. Tall comfortable stools with foot rests awaited our bums.”

“I knew I belonged here, a feeling of home.”

The Irish Times had its usual bustling St. Patrick’s Day crowd on Tuesday, including Andy Maxwell, who had heard of the pub’s Top 10 rating.

“I agree with it,” said Maxwell, whose costume for the day included a faux green beard and mustache. “We come every year. It’s fun for us.”

“We’re ecstatic. We’re so happy about it.” 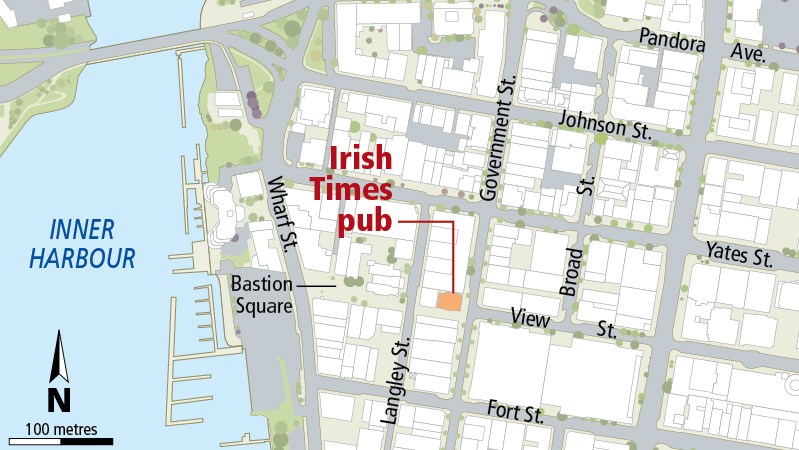