Victoria councillors have endorsed designs for four new bike routes that will extend the city’s all-ages-and-abilities cycling network through the Jubilee, Oaklands and Fernwood neighbourhoods.

Once constructed, the projects will add 4.8 kilometres to an expanding web of trails that will be 81 per cent complete once the new routes open.

Councillors meeting in committee of the whole approved a staff report recommending a 1.3-kilometre “Fort Street East” route with one-way protected bike lanes on each side of the road from Pandora Avenue at the Oak Bay Junction to Foul Bay Road.

Staff investigated two other options for the corridor ­ one running along Oak Bay Avenue and the other along Leighton Road — but decided on Fort Street East as it links to Royal Jubilee Hospital and to existing bike lanes on Richmond Road, Cadboro Bay Road and Foul Bay Road. The route also received support from the public and the District of Oak Bay, staff said.

Coun. Marianne Alto, who was the council liaison to the North and South Jubilee neighborhoods for the past two years, said the Fort Street East route is “probably the most likely to be supported by the most people.” Leighton is already accommodating to pedestrians, while Oak Bay Avenue “was always a push and pull between bikes and parking,” she said. “So it does seem like Fort Street at this section certainly seems to be the best of all worlds.”

Coun. Ben Isitt favoured a more direct east-west route across the city that would use Oak Bay Avenue. “I think it is a missed opportunity to not provide the public with just an ordinary kind of agnostic east-west corridor to travel between the downtown and Oak Bay proper and the vicinity of Oak Bay Village and the Oak Bay Marina,” he said. “For Oak Bay residents that’s a lack of convenience for their commutes into downtown and it’s also a lack of convenience for City of Victoria residents who might be making a trip in that direction.”

The other approved designs include:

• A one-kilometre Oaklands Connector with a share-road bikeway running from Hillside Avenue to Haultain Street via Doncaster Drive, Pearl Street, Shakespeare Street and through Oaklands Park. Speed limits will be lowered to 30 km/h with new speed bumps and added safety features at key crossings.

• A 1.1-kilometre Fernwood Connector from Haultain Street to Begbie Street via Avebury, Oregon and Stanley Avenues that will feature a share-road bikeway with similar speed and safety measures as the Oaklands connector.

The Fernwood and Oaklands connectors will be built this year using existing funds. Council directed staff to complete detailed design work on the Fort Street East and Fort Street Central routes this year and incorporate construction costs in the 2022 budget.

The city says 13.5 kilometres of all-ages-and-abilities cycling routes have been completed or are under construction. Another eight kilometres is slated to be built this year along Richardson Street, the Kings-Haultain corridor, Government Street North and the Kimta Road/ E&N Trail project. 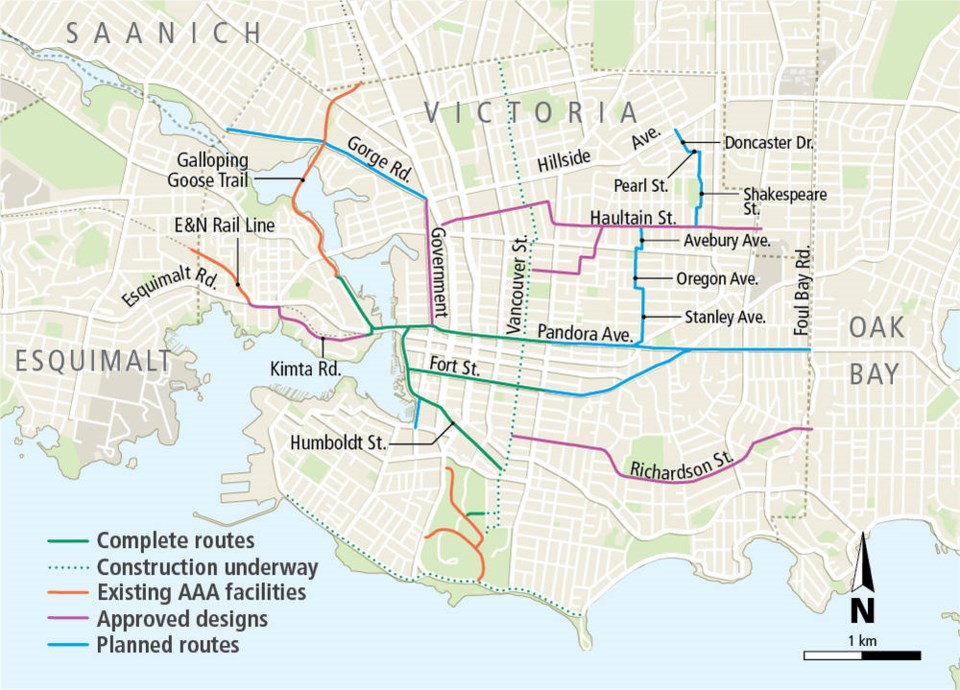 Butchart Gardens, other tourism operators struggle to get employees
May 21, 2022 2:20 AM