Lower Cowichan River closed to recreational use due to bacteria

As drought has reduced the river’s flow to a trickle, bacterial counts have soared to triple the danger point
Stephen Hume Aug 18, 2014 6:29 AM

The lower part of the Cowichan River, one of only three rivers in B.C. with Canadian heritage status, has been closed to recreational use as bacteria counts spike.

And if river levels drop much further, the Crofton pulp mill, the area’s largest employer, could be forced to shut down.

Fully treated municipal sewage is discharged into the lower river but as water flows have dwindled during a prolonged drought on Vancouver Island, the ability of the river to dilute the effluent also diminished. Some of the diffuser devices that disperse the effluent have ceased to function because they are now above water level as the river drops to a trickle in some places.

“I do not recall having seen levels of this magnitude before,” Hasselback said.

More samples were taken on the weekend but test results weren’t expected until early this week.

The river is popular with anglers, swimmers, kayakers and tubers, who like to drift the tranquil lower reaches of the Cowichan riding inflated inner tubes and air mattresses. The closure is a blow to the local economy that benefits from tourism on the river, which is one of the most important rivers on Vancouver Island for recreational and commercial fishing.

Health authorities are warning that the elevated bacterial counts for exposed recreational users can be associated with gastrointestinal disorders including abdominal pain, vomiting and diarrhea. A water quality study in 2004 concluded that the main sources of contamination on the lower river are the treated municipal sewage, fish hatchery effluent, agriculture and urban run-off.

It’s just the latest in continuing problems for the beleaguered heritage river.

Rainfall averaged 85 per cent less than normal in June and July. That meant steep reductions in river flow, and threatens immature fish and salmon due to begin arriving to spawn later this month.

The drought is an economic threat to more than just tourism: Water supplies for the pulp mill at Crofton are dwindling. 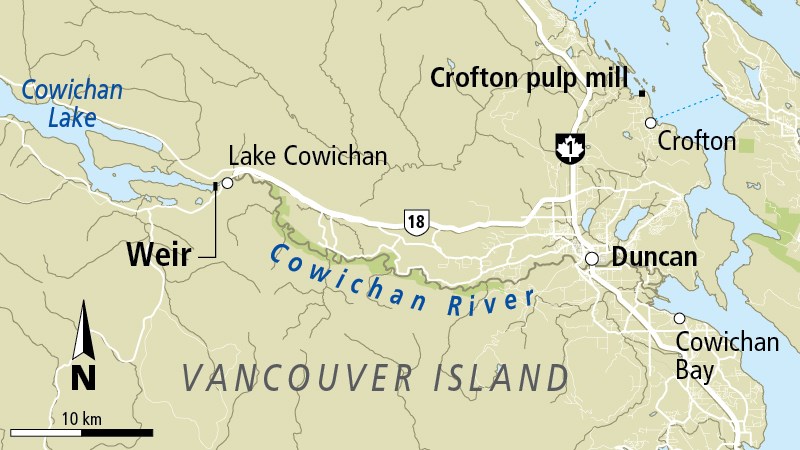 At four cubic metres a second, the mill would have to shut down, putting at risk more than 600 jobs in the Cowichan Valley and 5,500 jobs elsewhere in B.C. The mill generates $20 million a year in taxes and contributes a total of just over $1 billion a year to the provincial economy.

It’s estimated that if the drought conditions continue, usable water behind the weir will be exhausted by late September, the local newspaper reports, an event it says would be “catastrophic for the river.”

Jean Crowder, the NDP MP for Nanaimo-Cowichan, described the situation as “grim” in the Cowichan Valley Citizen on Friday and said she had requested federal emergency funding to address the environmental crisis.

“The Cowichan River is a valuable provincial resource which serves at the index river of the U.S.-Canada salmon treaty,” she told federal Fisheries Minister Gail Shea, Aboriginal Affairs Minister Bernard Valcourt and Environment Minister Leona Aglukkaq in the request for federal assistance.

“Low flow in the fall will impact returning salmon stocks and future allocations of stock across both countries,” she said. “An immediate risk management plan is being put in place but it requires an immediate funding commitment in order to abate the current situation. Given the severe impacts to First Nations, fish and the local economy, I urge you to assist by providing emergency funding.”

Among the emergency measures discussed has been pumping water from Cowichan Lake over the weir just to keep enough water flowing to let salmon to spawn and keep the pulp mill operating. But that’s seen as a temporary fix.

Others advocate raising the weir by about a metre to hold back more of the accumulated winter run-off that now escapes downstream from December to March. It would cost an estimated $3 million to raise the weir.