Jack Knox: The rumbles are back. And they’re LOUD

The Rumbles were back this week. Really back. This time the mysterious sonic phenomenon was so powerful that it rattled buildings and nerves from the Saanich Peninsula to Metchosin on Monday.
Jack Knox Jan 16, 2019 6:00 AM
Previous Next
1 / 1 A file photo of a U.S. Navy Boeing EA-18G Growler, which some Greater Victoria residents blame for the mysterious low rumbling noise.
Expand
Previous Next

The Rumbles were back this week. Really back.

This time the mysterious sonic phenomenon was so powerful that it rattled buildings and nerves from the Saanich Peninsula to Metchosin on Monday.

Stephanie Greaves was in her Oak Bay beachfront office talking to a friend when the low rumbling began. She had heard it before — as recently as Friday, in fact — but this time it was LOUD.

A professional singer, Greaves has a lovely voice (really, you should do yourself a favour and go hear her) but this stilled it in her throat. She stared at her friend. Her friend stared back. Was it the beginning of an earthquake? The end of days?

“I didn’t know whether to dive under my desk or just sit and listen and take it all in,” she said. “It was brutal.”

Similar reports dotted social media: houses shaking, dogs stopped in their tracks. One of the Times Colonist’s editors, who wishes to remain unidentified but whose name is Cam Purdy, was awakened from a late-morning slumber by the rattling of windows. The sensation would last 15, 20 seconds, then repeat periodically. We heard more Rumbles on Tuesday.

This is not the first time this type of thing has caught our attention, of course. We have been hearing the Rumbles — imagine a heavy truck driving by, or God bowling — since 2009.

That fits the most common theory about the source of the sound: Fighter jets flying out of the U.S. naval air station at Whidbey Island, 50 kilometres southeast of Victoria. The base’s EA-18G Growler electronic attack aircraft replaced the old Prowlers around the same time we first heard the Rumbles.

Whidbey Island also aligns with where Vancouver Islanders most often hear the noise: in Oak Bay and along the east side of the Saanich Peninsula.

Other sound sources have also been cited, though. In March 2012 a series of rolling thunderclaps whose vibrations were strong enough to collapse an old barn in Otter Point, past Sooke, were tied to the use of explosives in high-tech welding on the Olympic Peninsula.

And note that while Victorians reported hearing the Rumbles from late morning to suppertime Monday, the U.S. Navy says intensive training was only scheduled later in the day.

“We did field carrier landing practice from late afternoon until early evening,” said Tom Mills, the base public affairs officer. He couldn’t rule out the sound of other aircraft at the busy base, though.

In fact, if all goes to plan, the base will get busier. The navy wants to add up to 36 more Growlers to the 82 at the base, a reflection of the growing role of electronic warfare. The Growlers’ role is to jam enemy air defences and communication systems. They even block the ability to detonate roadside bombs.

“I was in the army in Iraq,” Mills said. “The only time my vehicle got hit by an IED was when we didn’t have that technology available.”

Whidbey Island is the only place the Growler crews train, most often at the main base at Oak Harbor, but also at an outlying field 15 kilometres to the south at Coupeville, where they repeat touch-and-go landings to simulate what they’ll deal with on aircraft carriers. 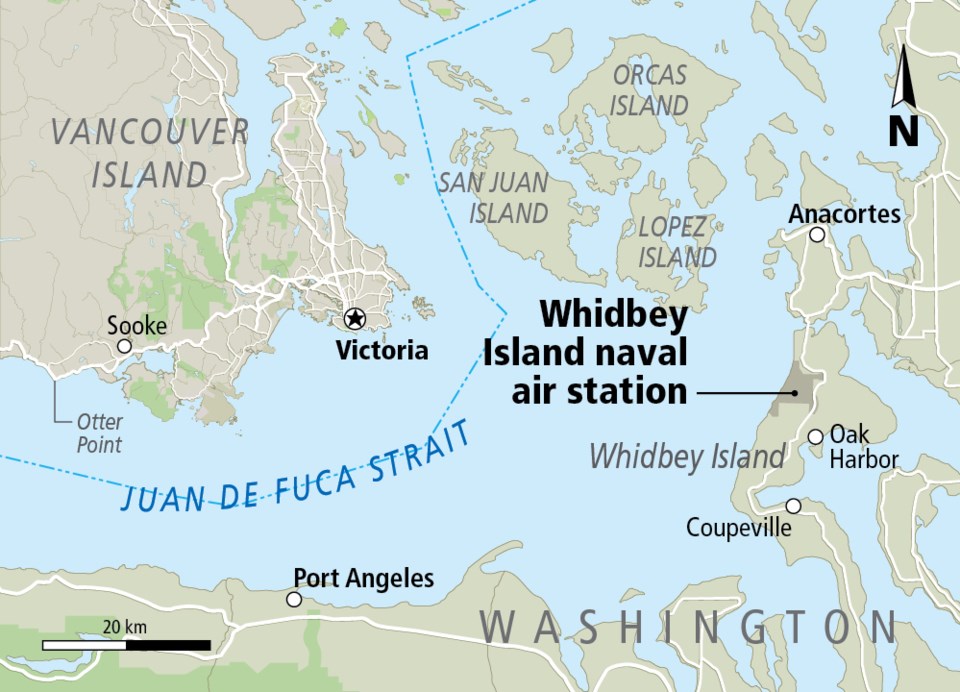 The added noise the additional Growlers will bring to Whidbey Island has left the navy at odds with state and local officials. Negotiations on how to mitigate the effects broke off two months ago. That, in turn, triggered a review that is supposed to be done before the secretary of the navy decides how many Growlers and training flights will be added, but that process has been stalled by the U.S. government shutdown. “We’re in this limbo,” Mills said, “waiting for everything to be resolved.”

Us, too. We never know what to expect, when we’ll hear the Rumbles and when we won’t (or, for that matter, what we’ll see: a Whidbey Island jet jockey got in big trouble after using his contrails to Etch-A-Sketch a giant phallus in the sky over northern Washington on a crisp, clear fall day in 2017). Wind, cloud levels and the like mean that sounds that travel one day are muted the next. A jet that’s flying west might not be noticed until it turns east, exposing its exhaust. Sometimes aircraft need not even take off, just have to power up and down on the runway to be heard from afar.