Gordon Head residents want the owners of a suburban cattle feedlot and Saanich to settle a zoning dispute before more cows are brought into the neighbourhood this fall.
Sarah Petrescu Sep 27, 2014 10:30 PM

Gordon Head residents want the owners of a suburban cattle feedlot and Saanich to settle a zoning dispute before more cows are brought into the neighbourhood this fall.

“The mayor could fix this in a short meeting,” said Ted Lea, who lives near the farm at 1516 Mount Douglas Cross Rd.

“Right now, our whole neighbourhood is at risk of another winter with this disgusting smell and muck. There are rats and fecal dust. Kids don’t want to play in their yards.”

The Alberg family owns the five-acre lot, which is in the Agricultural Land Reserve, and wants to rezone it to allow a higher density and create a subdivision similar to those on neighbouring properties. In the meantime, the property is being used as a feedlot for cattle.

The Albergs have held off growing the feedlot business in hopes of building the subdivision, but said they plan to triple their head of cattle from 24 to about 75 this winter.

Lea said 326 neighbours have signed a petition lobbying the district to rezone the property and allow it to be redeveloped as 16 residential lots.

“It’s a tasteful subdivision with large lots. Most of the neighbours are supportive. We’re mystified as to why Saanich council won’t help our neighbourhood,” Lea said.

Saanich council has received legal advice that the land cannot be zoned to a use that is contrary to the ALR, said Mayor Frank Leonard.

“Approving a rezoning while the property remains in the [ALR] is inconsistent with provincial legislation and the bylaw would be of no force and effect,” Leonard said in a Sept. 25 letter to residents.

“Taking a rezoning through public hearing to third reading while the property remains in the ALR is a clear signal to the Agricultural Land Commission that council supports the removal of the land. Council wishes the ALC to undertake its deliberations without undue influence and pressure from the local government — the ALC is the expert body in these matters and must come to its own decision.” 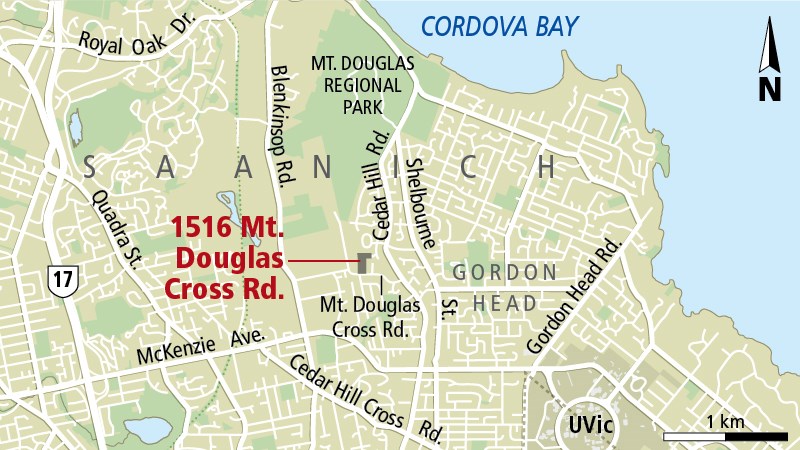 The residential property is owned by Don Alberg and his two siblings, all of whom were raised on the farm.

Alberg said his mother kept a few cattle on the farm until she was 100 years old. When she died about 10 years ago, the siblings looked at options for the property and decided a residential subdivision was the best fit for the neighbourhood.

“We proposed a subdivision we’d be proud to hang our hats on,” said Alberg, who oversees another farm in Qualicum Beach, where he lives. “We put a lot of environmental sensitivity into the plan, rain gardens, forest driveways, and each lot is a considerable size.”

Saanich council has rejected several proposals for the subdivision, citing concerns about the property being removed from the ALR and the impact on the ecosystem.

In 2013, the Albergs decided to farm again and opened a cattle feedlot. To appease neighbours’ concerns, they started slowly, with just 24 head of cattle.

“We didn’t do a lot of things last year because we were trying to be co-operative with the neighbours,” Alberg said, noting that without the rezoning, the family’s options are to farm the land or “sell it at a fire-sale price.”

He said they don’t want to take the risk of applying to have the property removed from the ALR — which would mean they could not farm it — without Saanich first approving the rezoning.

“We’re in a real pickle here,” he said. “We’re all practical people but they [Saanich] backed us into a corner and left us no options.”

Leonard said Saanich staff are in contact with the Albergs’ lawyer about an option that could allow them to still farm if the land was removed from the ALR, but did not explain what that would entail.

Witnesses report woman pushed on Oak Street sidewalk in random attack
May 27, 2022 10:01 AM