From tsunami-hit Japan, a song of thanks for Victoria

A teenage folk-singing sensation from Japan had the Victoria mayor, councillors and guests clapping along in city chambers Friday as she sang about her homeland.
Sarah Petrescu
Feb 21, 2014 9:55 PM

A teenage folk-singing sensation from Japan had the Victoria mayor, councillors and guests clapping along in city chambers Friday as she sang about her homeland.

Misaki Usuzawa’s performance was a thank you to the Victorians who came together to support her hometown after it was destroyed in the 2011 earthquake and tsunami.

“Thanks to you, we can sing, smile, enjoy each day,” said the 15-year-old. She and a delegation travelled to Victoria for three days of performances, including one today at Christ Church Cathedral.

Through a translator, Usuzawa told the story of her town and her rise as a singer in the aftermath of the tragedy. “I felt the shaking,” she said. When the magnitude 9 earthquake hit at 2:45 p.m. on March 11, 2011, Usuzawa was sitting in class at her elementary school in the coastal town of Otsuchi.

“We evacuated to the hill … and could see the roofs and debris.”

An hour after the earthquake and 14-metre tsunami destroyed most of the buildings, the fires started levelling what remained. A breakwater was snapped in half, boats sat on the roofs of buildings and much of the town was pounded to debris.

A tenth of the townspeople lost their lives, including two students from Usuzawa’s school. More than half of the 16,000 residents lost their homes.

“Rather than scared I could not believe it was real,” she said. Luckily, her family and home were safe.

When news of the earthquake hit Victoria, those involved in the twin city program — and many others — sprung to action. Victoria has been a sister city to Morioka, the capital of the district that Otsuchi is in, since 1985.

“The first thing we did was find out if everyone was OK,” said Bill McCreadie from the Victoria Morioka Friendship Society. “They were in Morioka, but the coastal area was devastated.”

The society raised $22,000 to help in the recovery efforts, with McCreadie and his wife personally delivering soccer balls and other goods to lift the spirits of local children. In 2013, the friendship society raised another $32,000 for instruments and sports equipment at Otsuchi Junior High School — the school Usuzawa attends.

More than $104,000 was also raised for disaster relief through the Support Japan 2011 — Gambare Nippon (Never Give Up, Japan) campaign.

After the earthquake, Usuzawa started to sing traditional Japanese folk songs to cheer up the residents at local shelters.

“I wanted to sing for the people, to open their hearts,” Usuzawa said.

When a local record producer heard Usuzawa singing on a morning news program, he saw a combination that could lift the country’s spirit and pride.

Usuzawa’s first record debuted in 2012. She won the Japanese equivalent of the Grammy for best new singer and sold more than 100,000 albums.

“I hope she can take her music overseas,” said Osamu, adding the young singer’s priority will be to finish school first.

Usuzawa and the Furusato Dancers will perform at Christ Church Cathedral (930 Burdett Ave.) at 2 p.m. Saturday. 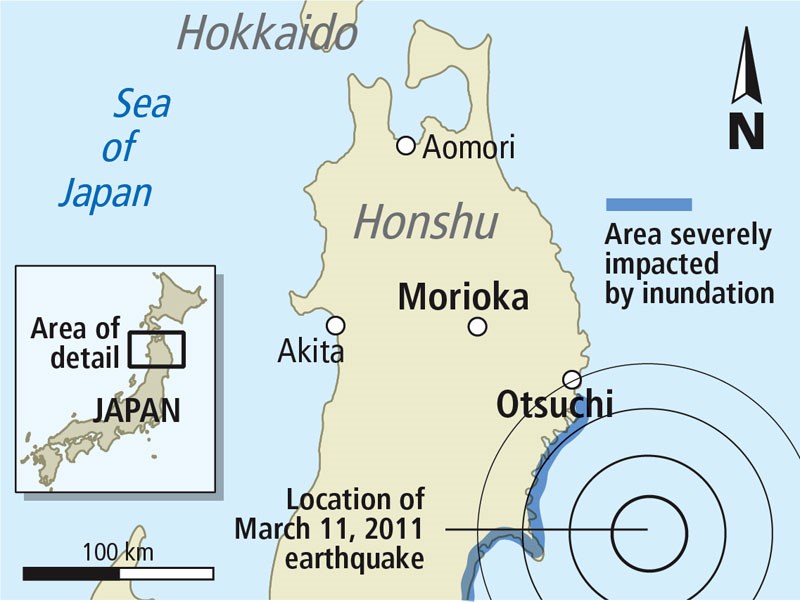 Mill Bay woman jumps into ocean to rescue driver after dump truck plunges off road into water
Jan 27, 2022 10:45 AM