The District of Central Saanich is going to court in an effort to shut down operations at Woodwynn Farms and its Creating Homefulness Society. In a notice of civil claim filed in B.C.
Louise Dickson
Jul 9, 2014 7:17 PM

The District of Central Saanich is going to court in an effort to shut down operations at Woodwynn Farms and its Creating Homefulness Society.

In a notice of civil claim filed in B.C. Supreme Court, Central Saanich asks that Woodwynn Farms be ordered to stop using the 200-acre property on West Saanich Road for commercial, office and institutional use, and as a recreational vehicle and mobile home park and campground.

Central Saanich also wants the court to declare that a store and coffee shop is not a farmer’s market under Agricultural Land Reserve regulations and that the use of the barn as a store and a coffee shop violates B.C.’s building code and the district building bylaw.

Finally, the district wants the court to order Woodwynn Farms to clear all Canadian thistle on the property every year before it goes to seed.

Woodwynn Farms has 21 days to respond. Richard Leblanc, executive director of the society, said the court documents are in the hands of their attorney.

“Our attorney will come to the board with different options and advice,” said Leblanc, who has been battling the district since 2011 to turn the property into a therapeutic farm housing 96 residents and 24 staff, with a retail market, craft workshop, museum and gallery, dance hall, restaurant and cafe.

Woodwynn Farms attempts to educate, rehabilitate and integrate into society people who are homeless, criminally involved, mentally ill and addicted to drugs. It also aims to provide transitional and low-income housing.

“It’s a challenge. The need is great and the need is absolute and we found the NIMBY [not in my backyard] dynamic follows programs like this. We’re looking for any kind of light at the end of the tunnel,” Leblanc said.

“On the surface, we’re talking about building codes and bylaws. But underneath, it’s really about the stigma of bringing homeless people to the neighbourhood.”

Central Saanich acting mayor Cathie Ounstead is on holiday and could not be reached for comment.

According to the district’s notice of claim, the property is located within the Agricultural Land Reserve and is zoned Agriculture A-1 under Central Saanich’s land use bylaw.

In April 2011, the society applied to the district to rezone the property to permit commercial or institutional uses. The society wanted to create eight dormitory buildings to treat and house 120 people. The plans included a retail market, craft workshop, museum and gallery, a dance hall, a restaurant and cafe, kitchen and dining hall, an outdoor market and a performance stage.

In May 2011, the district denied the rezoning application.

In July 2011, the society submitted an application for non-farm use in the ALR under the Agricultural Land Commission Act. The proposal called for 12 residents at the time of opening, expanding to 96 residents and 24 staff housed on the property.

In March, the application was refused by the commission.

But, according to the notice claim, the society went ahead and developed the property for non-farm use including a residential program, offices, staff housing, a coffee shop, retail store and a yoga studio.

The society has also allowed 10 recreational vehicles and mobile homes on the property, says the notice. In 2012 and 2013, a number of tents were erected on one of the hay fields and outhouses were built without a temporary use permit.

The notice also says the coffee shop and retail store are in a barn that does not comply with the B.C. building code and poses a safety hazard.

Although a No Occupancy notice was posted on the barn on May 27, 2013, it continues to be used as a store and coffee shop.

In June 2013, the municipality gave the society five $200 tickets for holding the farm market in the barn. Leblanc vowed not to pay them. All five tickets were stayed in the fall, he said. 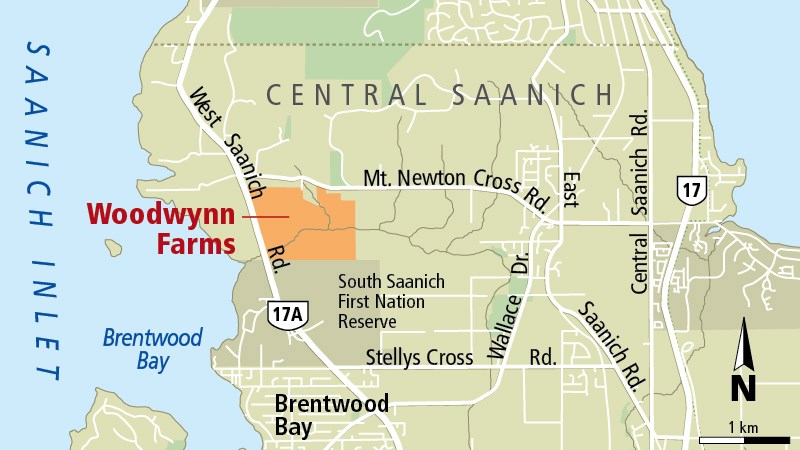