Electricity is expected to be restored by New Year’s Eve to all areas blacked out by Thursday’s storm, which saw winds of more than 100 km/h. That would mean going without electricity for 11 days for some people. B.C.
Louise Dickson,Katie Derosa Dec 28, 2018 8:29 AM
Previous Next
1 / 1 A B.C. Hydro crew makes repairs. File imageB.C. Hydro
Expand
Previous Next

Electricity is expected to be restored by New Year’s Eve to all areas blacked out by Thursday’s storm, which saw winds of more than 100 km/h. That would mean going without electricity for 11 days for some people.

B.C. Hydro said 600,000 of its customers lost power in the storm, which toppled hundreds of trees, leading to downed power lines and blocked roads. About 90 per cent of those customers had their power restored within 48 hours, the corporation said.

A restoration schedule shows that many areas on Vancouver Island should have their power back today or Thursday, including Nanaimo, Ladysmith, Tofino and Ucluelet.

But Saturna will have to wait until Dec. 29 and Salt Spring until Dec. 30 to have power fully restored. Parker Island, in the Southern Gulf Islands, is last on the schedule, with restoration expected on Dec. 31.

About 9,700 B.C. Hydro customers were still without power on Christmas evening.

B.C. Hydro spokeswoman Mora Scott said most of those without power are on Vancouver Island and the Southern Gulf Islands. “We have about 90 crews working on Vancouver Island and the Gulf Islands today,” Scott said. “The damage is really extensive, though, in the remaining areas and there are still hundreds of individual outages, so it’s going to take some time to restore the power to everyone.”

The windstorm was the worst that B.C. Hydro has seen in 20 years and more than 800 people are working around the clock to repair the damage, a B.C. Hydro statement said. About 300 power poles and 170 transformers were destroyed in the storm.

Crews from as far away as Atlantic Canada and Alberta have been brought in to help.

The hundreds of outages will require crews to attend to each of them individually to make repairs, including restringing hundreds of spans of lines, and replacing power poles and transformers. — With The Canadian Press 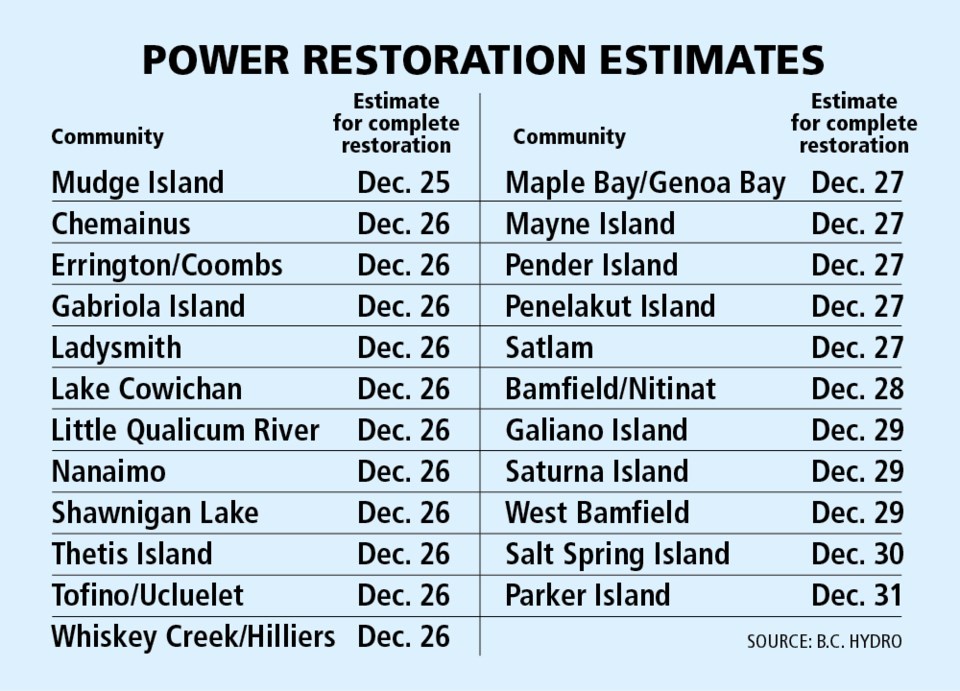 Dec. 24, 2018: About 20,000 homes on Vancouver Island remain without power after Thursday’s devastating windstorm.

“The hard-hit areas are Duncan, where we have more than 4,000 customers without power, the Gulf Islands, Nanaimo and Qualicum,” B.C. Hydro spokesman Ted Olynyk said Monday. “It will take a few days to restore power to those who are hardest hit.”

At the storm’s peak, more than one-third of customers on Vancouver Island were without power. B.C. Hydro’s outage map painted the whole Island red.

“This is one of these once in many decades storms,” said Olynyk. “This was a historic event. We’re bringing in crews from Alberta and the east coast. In my many years on the Island, I don’t recall us bringing crews over from outside of B.C. to the Island to help with storm restoration. That’s evidence of how extensive the damage is.”

Salt Spring Island has extensive damage. Lines are down and there are a lot of broken poles, said Olynyk.

Forty spans of power lines are down in Stoney Hill in North Cowichan.

“And it’s total devastation in the Hilliers-Whiskey Creek area near Coombs. Basically, the guys are treating it like a rebuild. There are so many downed lines. So many broken poles,” said Olynyk.

Gabriola was hit hard. A lot of big trees are down on the lines and the electrical feeder that goes to Gabriola was affected as well, said Olynyk. By Monday, some power had been restored.

Power has been restored to Tofino and Ucluelet, but B.C. Hydro is still dealing with a few smaller outages in the area.

“In 2006, we had one series of storms after another. It seemed like it was one storm that lasted from November to January and it wouldn’t stop. But the difference in 2006 was we had a strong event, then the next event would be in another area so we could make repairs and it was easier to move crews around.

“With this it’s been difficult because of the swath of the storm is just so widespread that we weren’t able to move crews over as quickly, nor bring crews over from the Lower Mainland as quickly as we could because the damage was so extensive to the whole south coast.”

In the Cedar-Yellow Point area, a helicopter was brought in to restore the power line. Then the crew had to go down into a farm area to access the pole.

“We had to use an excavator to clear where we had to go. Fortunately, we had an excavator there. Our big heavy-duty bucket trucks were being stuck in the mud down there. So that just slows it down,” said Olynyk.

Crews are working 12 to 16 hours at a stretch. Some have come in on holiday time to help out. The silver lining in this windblown situation is the patience and appreciation people are showing.

B.C. Hydro continues to remind people to stay back at least 10 metres from a downed line and to call 911. “What we’re seeing is just unbelievable. People are taking the opportunity to cut firewood while the tree is still on the line,” said Olynyk. “We’ve come to areas where there’s just little bits of sawdust left and the tree is essentially cut up. They’re taking enormous risk just by doing that.”

By 1:30 p.m. Monday, DriveBC reported 80 per cent of Salt Spring Island roads were passable, though with marked hazards in places.

Half the roads on Saturna and Thetis islands were still blocked, as were 80 per cent of those on Galiano.

By contrast, 95 per cent of the roads on Pender were passable, as were all of those on Mayne, though with some hazards.

Mainroad South Island was working with B.C. Hydro to clear roads and restore power in the southern Gulf Islands, and was sending generators, water and equipment to places where it was needed.

All ferry terminals are open.