Soy chicken at Hon's in Vancouver, $7.50. We paid a visit to Vancouver the other day in a sort of dry-run for the Olympics and headed into Chinatown for a couple of meals. Hon's Wun-Tun House is one of the restaurant mainstays in Chinatown.
Phillip Jang Feb 7, 2010 5:38 AM

We paid a visit to Vancouver the other day in a sort of dry-run for the Olympics and headed into Chinatown for a couple of meals.

Hon's Wun-Tun House is one of the restaurant mainstays in Chinatown. Back home in Victoria, you'll find their handiwork – a variety of dim sum items – in the freezer section at Fairway grocery stores.

The waitress took our order by punching numbers into an iPod touch that was connected to the restaurant's wi-fi network.

The pot stickers were an incredible deal – roughly half price – because it was being promoted as the 37th anniversary special. Hence the $3.37 price. And they were terrific. Crunchy on one side, soft on the other, only slightly greasy. The filling was minced pork, carrots and peas.

The soy chicken was also a delight. It's cooked in a soy-sauce-based liquid and the result is flavourful and moist — one of the best ways to prepare chicken. Hon's version was almost melt-in-your-mouth.

And the wor wun-tun. It was a mixed experience. My eating companion found the barbecue pork that topped it to be the highlight of the meal. It wasn't fat-laden, as barbecue pork can sometimes be (and some people prefer it that way), and it had a pleasant, freshly-prepared taste.

The giant soup bowl  — definitely enough for two people — also contained stalks of choy, pork-and-shrimp wun-tun, mushrooms and green onions. I encountered gristle in several of the wun-tun and had to spit it out into my napkin (is that how you're supposed to do it?). The choy was overcooked and a touch unpleasant. And the broth, despite its appealing caramel colouring, was strangely tasteless.

Despite the soup disappointment, it was a good experience. You can watch the action in the open kitchen, wonder at the strange meals more experienced diners are eating, and watch the world go by on the bustling street.

Hon's has four locations in metro Vancouver. The one in Chinatown is at 108 268 Keefer. We got there by riding the SkyTrain to Stadium/Chinatown station, and walking a little. 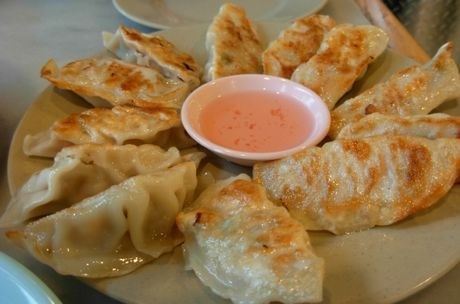 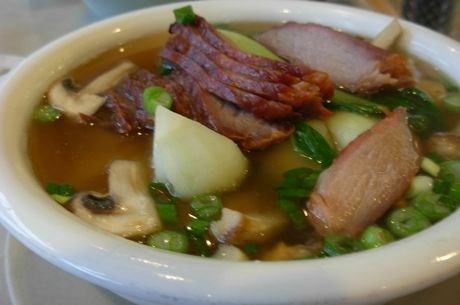 Both buns were generously filled with minced pork that was coated in a tasty barbecue sauce. My eating companion declared the steamed pork bun to be among the finest he's ever eaten, and talked about it as a highlight of the trip when he got home.

The egg tarts were apparently good too. I left them to my eating companion, since he was so enthused about them.

We sailed from Victoria on B.C. Ferries, and travelled to and around Vancouver using public transit. It was mostly a good experience.

But TransLink, which operates metro Vancouver's transit system, doesn't give much priority to the Tsawwassen ferry terminal. It's not possible to buy a day pass ($9) or tickets at the terminal. There's even a plasticized sign saying day passes aren't available. So, make sure you have enough change. It's $5 to get to downtown — a three-zone fare — during peak times. In the evening and on weekends, it's $2.50, a one-zone fare.

You catch the route 620 bus at a stop just outside the terminal. It's usually a bendy-bus – an extra-long one, and everytime I've caught it, it's been packed. It goes on a meandering 40-minute journey from Tsawwassen to the Canada Line's Bridgeport station.

The bus service is only hourly — leaving at the top of the hour — which I regard as another slight to ferry passengers.

At Bridgeport, you can board a Canada Line train into downtown, to Richmond, or to the airport. (There's a sign at the airport with a boast: 25 minutes to downtown on the Canada Line.)

The transit system becomes a delight to use (just keep smiling if you get squished) once you're on the Canada Line. There's a big open area near the doors, designed for people with luggage. Next-stop information is displayed on electronic signs. Trains are frequent, the ride is smooth, the seats — if you can snag one — are comfortable. More comfortable than the ones on the old SkyTrain cars.

More on day passes and tickets: You can buy them in a variety of places, including 7-Eleven stores. And from the machines (they accept credit cards and paper bills) at Canada Line and SkyTrain stations. You need to validate pre-bought passes and tickets by running them through a bus farebox or a validation machine at a station. Make sure you point the (hard-to-see) arrow the right way.

Because you can't buy a day pass at the ferry terminal, you might want to plan ahead for your next trip, and buy some passes while you're in town. Otherwise, if you're travelling at a peak time, you end up paying $5 to get into downtown, then $9 for a day pass if you're going to be zipping all over the place. Better, and cheaper, to just start off with a day pass.

All this ticket buying stuff, by the way, doesn't matter if you have a ticket to an Olympic event. The Olympic ticket serves as a TransLink day pass for travelling on the day of the event.