After years of sampling, I’ve discovered that you can bake just about anything in puff pastry and it will taste good. But when seafood is stuffed inside, things always go up a notch, and go from tasting good to tasting divine.
Eric Akis Mar 28, 2018 6:00 AM

After years of sampling, I’ve discovered that you can bake just about anything in puff pastry and it will taste good. But when seafood is stuffed inside, things always go up a notch, and go from tasting good to tasting divine.

That was true again when making today’s salmon in puff pastry recipe. A salmon fillet is topped with a shrimp and spinach mixture flavoured with dill, lemon and garlic. The fish is then sealed inside the pastry and baked.

The result is a superb, moist and flavourful golden-crusted, seafood- filled pastry that looks like a savoury strudel. To serve, slice the pastry into portions and accompany it with a tangy and creamy mustard sauce. In the recipe I also give you the option to serve it with tzatziki.

I served the salmon, shrimp and spinach in puff pastry with boiled mini potatoes, steamed asparagus and sautéed cherry tomatoes. But you could also simply serve it with a nice green salad.

This recipe is a special-occasion kind of dish that one could serve at Easter or other special spring dinner. Sealing the fish inside the pastry is a little tricky, but my preparation photos will guide you on how to do that successfully.

Salmon, topped with a dill-, lemon- and garlic-flavoured shrimp and spinach mixture is sealed in puff pastry and baked.

For the spinach and shrimp filling

• salt and white pepper to taste

Pour 1/2-inch of water into a large pot and bring to a boil. Add spinach and cook and stir until it just wilts, about three minutes. Set a strainer in your kitchen sink and drain spinach in it. Rinse spinach with cold water to cool.

Firmly press the spinach and squeeze out as much water as you can. Now, coarsely chop spinach and set in a bowl.

Coarsely chop the shrimp and add it, and the remaining ingredients, to the bowl. Mix well to combine.

Cover and refrigerate the filling until needed below. The filling can be prepared many hours in advance.

For the salmon and pastry

To ensure the fish perfectly fits inside the pastry, trim salmon fillet so that it is 10 inches long and 4 1/2 inches wide (see Note 3). On a lightly floured surface, roll pastry into a 14-inch by 12-inch rectangle.

Set pastry on your work surface so that one of the 14-inch wide sides is in front of you. Set the salmon right along the edge of that side of the pastry, leaving two inches of clean pastry at both ends of the salmon fillet.

Top the salmon with the shrimp and spinach filling, setting it in an even layer and gently packing it on. Fold over the two inches of clean pastry at either end of the salmon fillet.

Now carefully lift and fold the fish into the pastry. Brush the still-exposed top edges of the pastry with beaten egg. Fold the pastry over again to completely seal the fish inside it.

Set pastry seam-side down on a parchment paper-lined baking sheet. Brush pastry all over with beaten egg. Set pan in the refrigerator and chill pastry 30 minutes (the chilling will cause the pastry to puff better when set in the hot oven; see Eric's options).

Preheat oven to a 350 F. Bake the pastry in the middle of oven 40 minutes, until puffed and golden and the fish and filling are cooked (see Eric's options).

Let pastry rest 10 minutes before slicing into six portions with a very sharp, serrated knife. Serve with a sauceboat of the dill mustard sauce, for spooning alongside or on the pastry at the table.

Note 1: I used skin-on salmon fillet for this recipe. If you prefer to cook the fish with the skin off, ask your fishmonger to remove it when buying the salmon.

Note 2: I used Tenderflake brand rolled puff pastry in this recipe. A 500-gram box of it contains two individually wrapped rolled pieces of puff pastry. You’ll only need one for this recipe. Keep the other frozen for another use.

Note 3: Freeze and save salmon trimmings for another use, such as chowder or fish stew.

Eric’s options: You can seal the salmon and filling in the pastry up to two hours before baking.

When baked for 40 minutes, if the pastry is not quite as golden on top as you like, turn the oven to broil and broil the top of pastry one to two minutes. Now remove and rest and slice the pastry as described in the recipe.

Instead of the dill mustard sauce, try serving the fish with homemade or store-bought tzatziki.

This rich, tangy, dill-flecked sauce will nicely compliment the salmon in pastry.

• salt and white pepper, to taste

Place wine in a small pot set over medium-high heat. Bring wine to a boil and then reduce to about 2 Tbsp. Add whipping cream and bring to a gentle simmer, lowering the heat as needed to maintain that simmer. Simmer cream until a lightly thickened sauce is created. Whisk in the mustard and dill and season with salt and pepper. Simmer sauce one more minute and its ready.

Eric's options: You make the sauce many hours before needed. To do so, once you've whisked in the mustard and dill, immediately remove from the heat and cool to room temperature. Cover sauce and keep refrigerated until ready to reheat and serve with the salmon.

Use the photos and words below to guide you when making today's salmon, shrimp and spinach in puff pastry recipe. 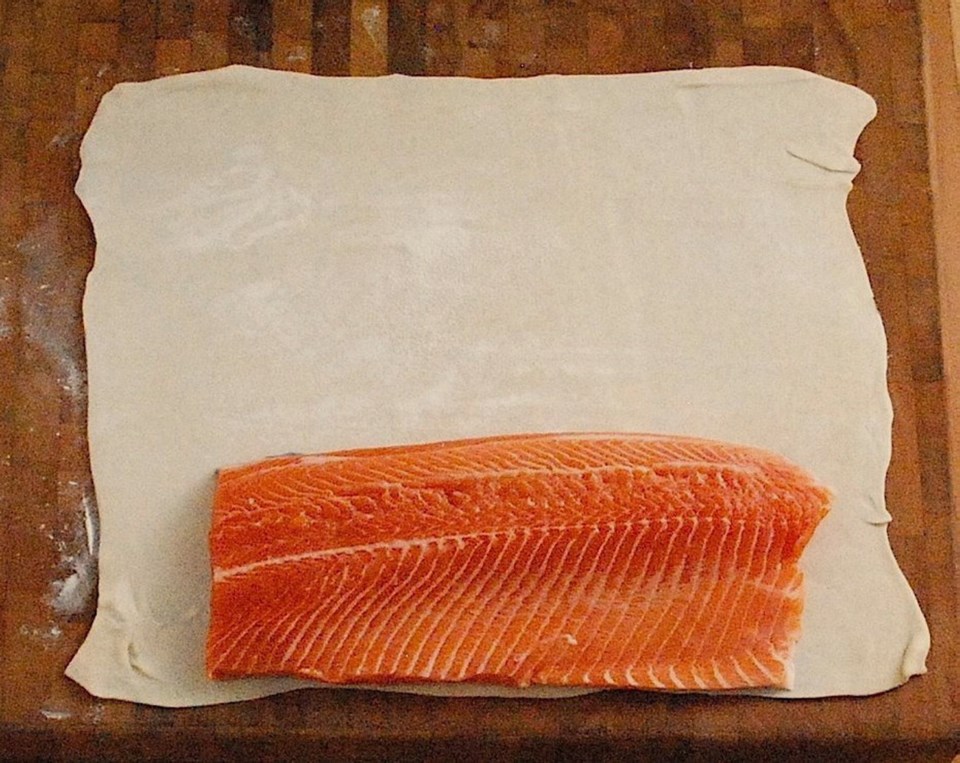 Step 1: Set rolled pastry on your work surface so that one of the 14-inch wide sides is in front of you. Set the salmon fillet along edge of that side of pastry, ensuring there's two inches of clean pastry on either end of the fish. 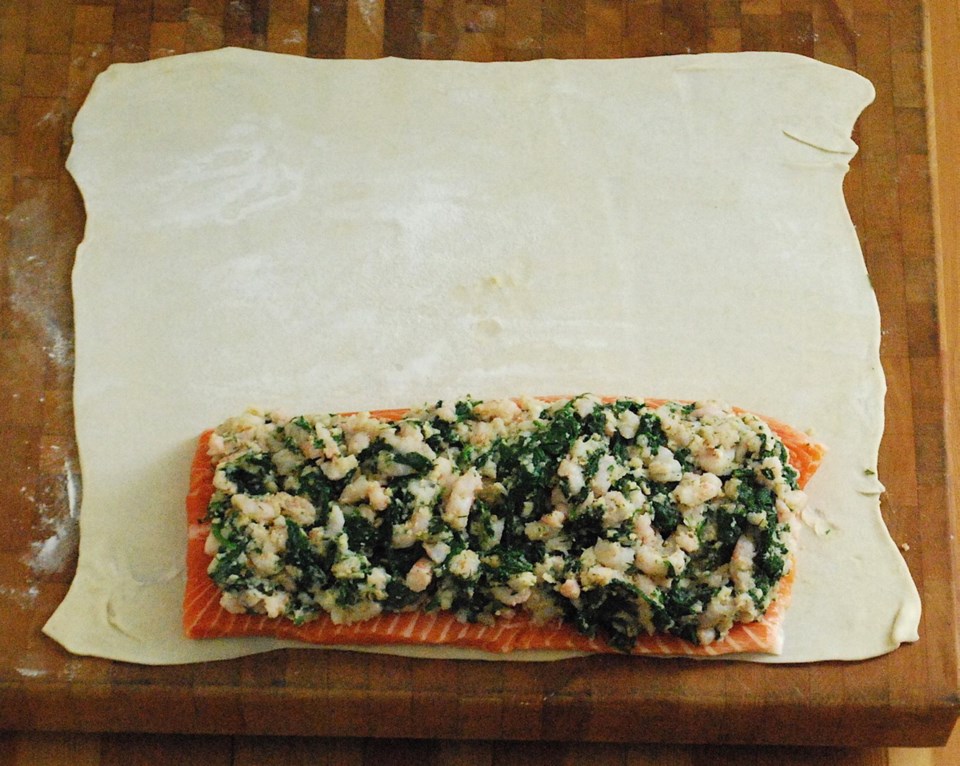 Step 2: Top the salmon with the shrimp and spinach filling, setting it in an even layer and gently pack it on. 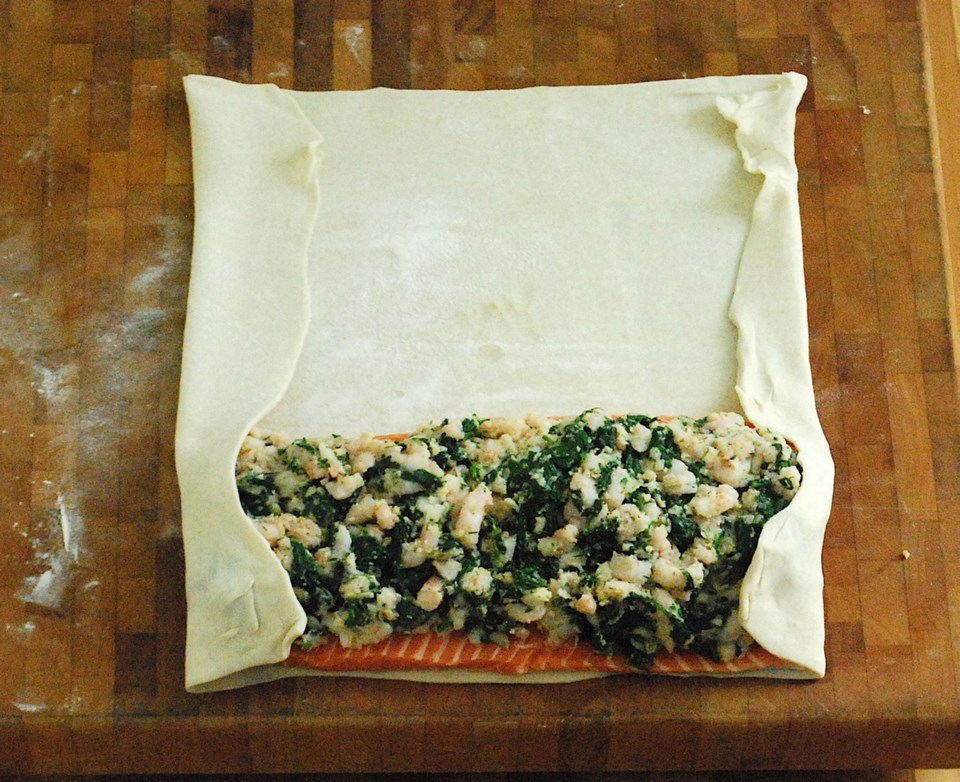 Step 3: Fold over the sides of the pastry. 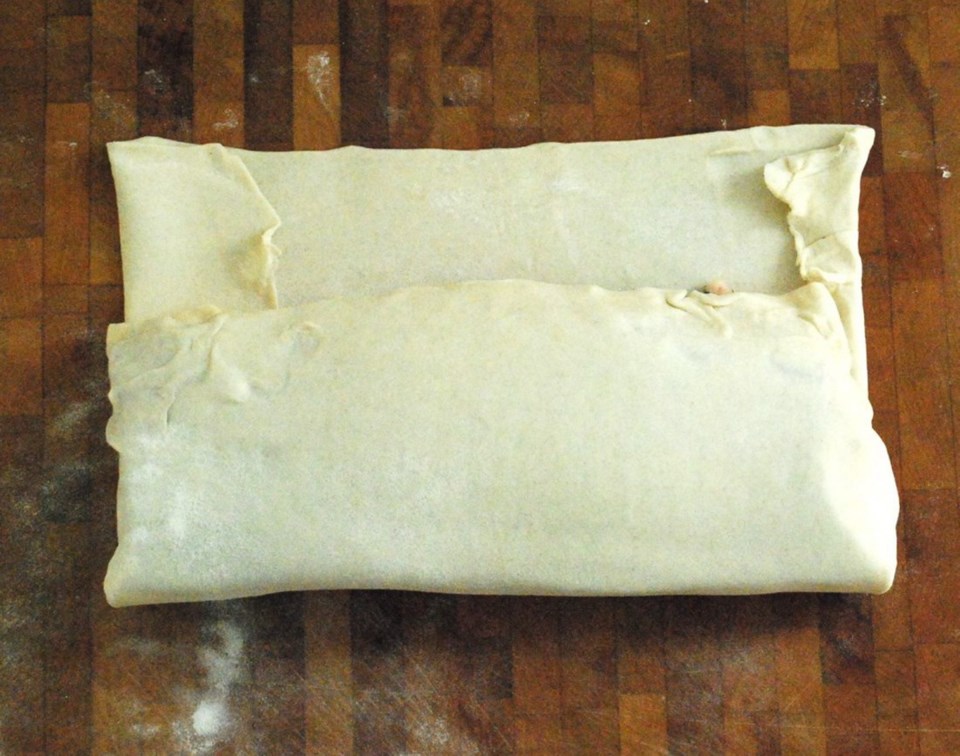 Step 4: Now carefully lift and fold the fish into the pastry. 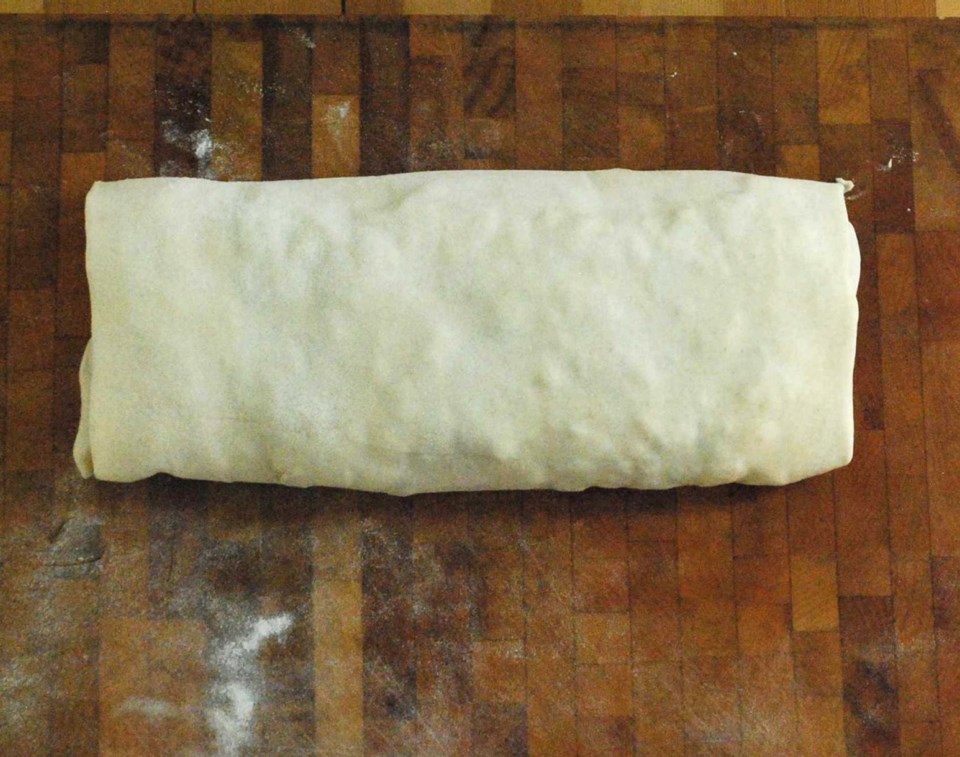 Step 5: Brush the still exposed top edges of the pastry with beaten egg. Fold the pastry over again to completely seal the fish inside. The filled pastry is now ready to be transferred to the baking sheet, brushed with beaten egg, chilled, and then baked as described in the recipe.

Eric Akis is the author of eight cookbooks. His columns appear in the Life section Wednesday and Sunday.