In a renovation as extensive as ours, it's a good idea to divide some duties. My husband and I decided we didn't each have to be involved in the minute details of every decision. Luckily, Brad was willing to take on some of the dirtiest jobs.
Oak Bay Renovation Feb 24, 2012 6:42 PM

In a renovation as extensive as ours, it's a good idea to divide some duties. My husband and I decided we didn't each have to be involved in the minute details of every decision. Luckily, Brad was willing to take on some of the dirtiest jobs. This week, I turn the blog over to him to explain what happened with our sewers:

In a previous blog post -- "Plan for surprises" -- we described how we discovered moisture seeping through the basement walls during the sixth week of our reno. That discovery led to the excavation of much of our foundation to upgrade drainage and to waterproof our basement walls.

That work also revealed that the storm drains connected to the eavestroughs around our foundation fed into the sanitary sewer system at the street, rather than the storm sewer. Our municipality required us to fix this situation -- and we were happy to do so. Stormwater doesn't need to go through the more expensive treatment process required for sewage. But the process of meeting this obligation was not without its unique challenges -- to say nothing of costs.

Apparently, it was quite common during the post-war building boom -- our house was built in 1946 -- for stormwater and sanitary sewage to be run out to the street through a common pipe. There was no sewage treatment back in those days -- so it was all going to the same place anyway. (In fact, the municipalities of the Capital Regional District -- of which Oak Bay is one of 11 -- still do not treat sanitary sewage to any significant degree. The sewage is simply pumped out into the Strait of Juan de Fuca. That is about to change, with plans to start building an integrated sewage treatment system over the next five years or so -- hence the need for the municipality to separate stormwater from sanitary sewage.)

We were perfectly willing to create the separate connections and dutifully paid the municipality more than $3,000 for the privilege. However, another challenge revealed itself when the municipal crew arrived to complete the hook-up.

This challenge led to a consultation with an engineer: What kind of pump system would be required to raise water from the footings to the street's strom sewers? First, he estimated the drainage runoff -- using the following algorithm: 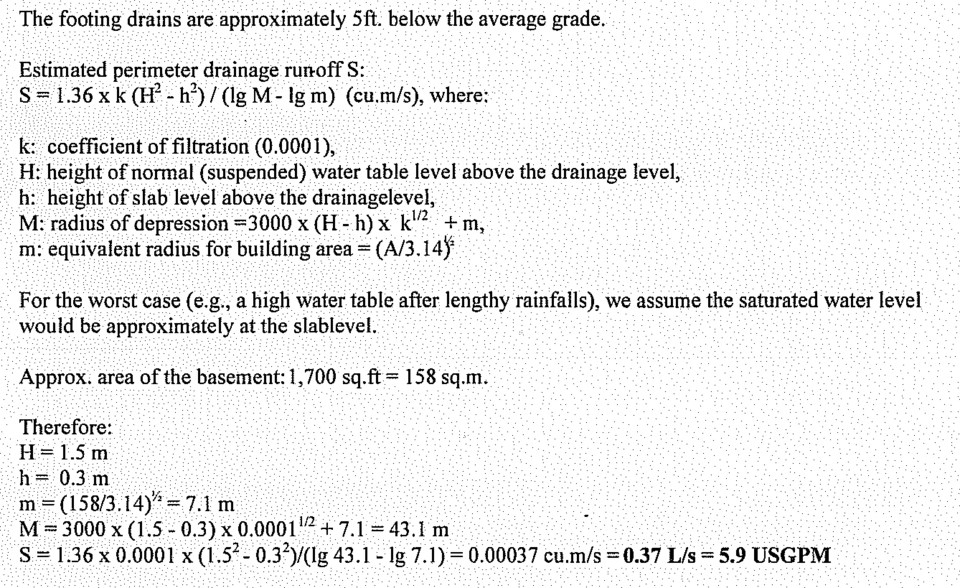 When we  had these recommendations priced out, the total cost for the sump pump system was between $4,500 and $6,000 -- for the pumps and creating a space to locate them. I joked with our contractor, Dave Rannala, that it would be cheaper for us to pay the municipality an extra $100 a year in taxes to cover the cost of treating stormwater  that -- in the worst case -- would flow at six gallons a minute.

What is most frustrating is that all of this was avoidable. We are facing this added expense because of a decision made years ago by a municipal official that the storm sewer on our street would be placed above the household sanitary sewer. And, adding insult to injury, we had to pay the municipality more than $3,000 for the "privilege" of hooking into a sewer that was at the wrong depth. Somehow, it just doesn't seem fair.