Before and during demolition

Here are some before and after shots of the house as it was and as it is under "destruction." Dumpster takes up almost the whole driveway, but ... ...
Oak Bay Renovation Dec 9, 2011 4:12 PM

Here are some before and after shots of the house as it was and as it is under "destruction."

Dumpster takes up almost the whole driveway, but ...

... before we junked anything, all the good stuff went to Habit for Humanity's ReStore, which resells useable material to raise money to build homes for the working poor. We managed to salvage a lot of cabinetry, plumbing fixtures, some appliances and furniture.

The lovely slate path and some of the plants along the east side of the house had to be temporarily removed to make way for a new gas line (there was gas on the street, but not in the house) and a new water line (which will now meet the building code and, we hope, mean that it will be possible to run a tap if someone's in the shower and not affect the water pressure).

FRONT ENTRANCE: The front hallway led directly to the main bathroom. That's the white door you see at the end of the hall in the before photo. By end of the first day, the door was gone and the bathroom was down to its original lathe and plaster walls.

FRONT ENTRANCE: Here's a view from the kitchen to the front door, taken later in the process -- the closet is gone.

KITCHEN.1: The before photo shows the north wall of the kitchen, with upper cabinets, lower drawers and the fridge. The wall backed onto the stairwell to the basement. In the after photo, the cabinetry and fridge are gone and the incline of the ceiling of the stairwell is visible behind the lathe and plaster.

The demolition uncovered the brick chimney we knew was there. It was no longer in use because the old oil furnace had been replaced by electric heating in a previous renovation. It ran from the basement up through the main floor. The demolition crew had suggested removing only the upper floor section of the chimney, leaving the one in the basement, hidden behind the walls. Luckily, our contractor, Dave, told them to pull it all out. Removing the basement portion left an empty space at the bottom of the stairs that Dave thought would be perfect for a closet. Exactly. Got to like it when your contractor thinks like you do.

KITCHEN.2: In the before photo, there's a pantry behind the closed bifold doors. In the after photo, the doors and the pantry are gone. Now, you can see from the kitchen into where the ensuite was (and will be after the renovation). That bathroom had a large whirlpool tub (that never worked properly) under the glass-block window wall. The glass blocks will remain (too expensive and too much of a pain to remove) and a new oval tub will be installed. Brad (who is the bather in the family; Angela prefers showers) is tickled that the style of tub the designer suggested (and he happily approved) is called "The Jazz."

KITCHEN. 3: The pony wall with glass blocks that divided the kitchen from the family room, three steps below, was gone in the next few days.

ENSUITE: The original master ensuite had a very large jetted tub that sounded like a very loud tool grinder, which is why it didn’t get used much. The double sinks were chipped; the faux marble tiles on the counter were hideous and the wood edging was worn. The week before the demo started, the cabinet doors started falling off. Since the time we had moved in, the cupboard doors in the kitchen would fall off with alarming regularity. As the demo date approached, we just stopped trying to put them back up.

STAIRS: The stairs to the basement used to have a sloped ceiling that made it feel like you were descending through a tunnel. My friend and former colleague Grania Litwin -- who now writes the House Beautiful column for the Times Colonist -- suggested removing the false ceiling -- a great idea. It will make the space feel more open. 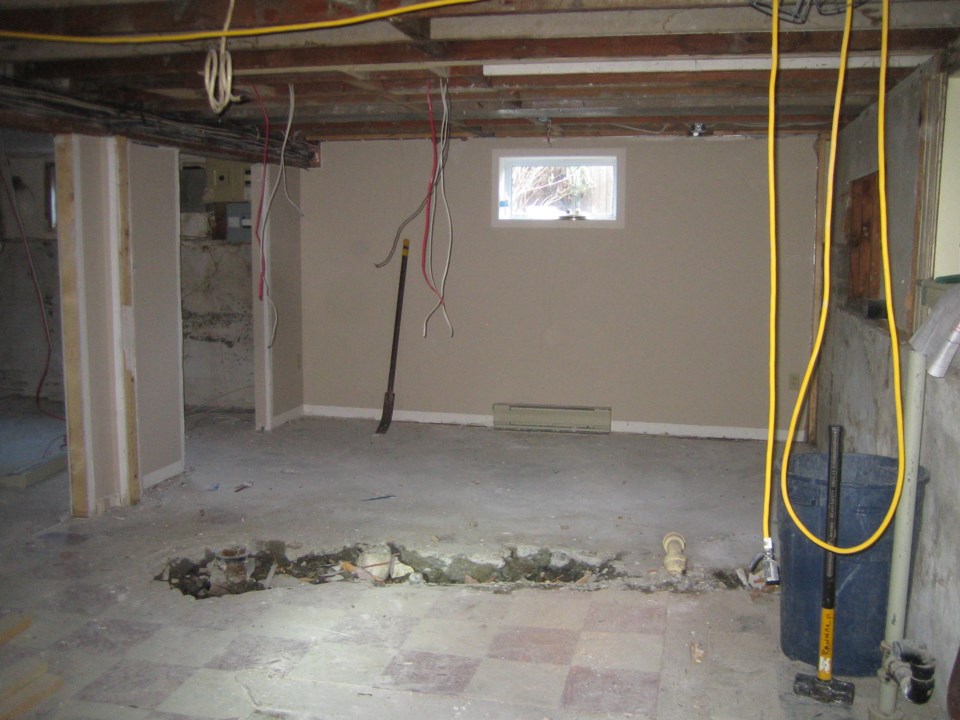 DOWNSTAIRS BATHROOM: All you need to know about the downstairs bathroom is that was installed without a building permit. Yes, it was a mess and we're fixing it.