PORT McNEILL — “We don’t have Walmart,” says Amber Brown, wrestling a keg of beer into the back of a van.
Jack Knox
Sep 5, 2021 6:00 AM
Previous Next
1 / 1 The harbour at Port McNeill. The town of 2,000 is in the North Island-Powell River riding. DARREN STONE, TIMES COLONIST
Expand
Previous Next

PORT McNEILL — “We don’t have Walmart,” says Amber Brown, wrestling a keg of beer into the back of a van.

She’s outside Port McNeill’s spanking new Devil’s Bath brewpub, getting ready to run the beer garden at the next day’s North Island Music Festival at the Big Burl Ball Diamond. I have interrupted her preparations to ask what city dwellers don’t know about life up here.

She uses Walmart as a catch-all for a bunch of stuff that you won’t find in this town of 2,000: malls, Costco, office towers, ­public transit….

Also, she says, the doctor situation is sketchy. So, if big city services are your thing, or you have complicated health issues, maybe Port McNeill isn’t for you.

But it’s also beautiful at the top end of the Island. Nature dominates. And it’s safe. No stranger is going to mug you on the street.

The gap between the sparsely populated northern tip of the Island and the Starbucked and stoplighted world to the south is, literally and figuratively, vast. Other than Woss (pop. 200) and Sayward (400 in the village, maybe 900 in the valley) for the most part there’s nothing on the 195-kilometre expanse of highway between Port McNeill and Campbell River — roughly the same distance as Victoria to Courtenay — but the odd rest stop with bear-proofed garbage cans. Good luck getting a cellphone signal.

This is not the end of North Island-Powell River where the local election race will be decided. In area, the sprawling riding is not much smaller than the Republic of Ireland, but the bulk of the votes are squeezed into the very south. One-third of the 105,000 residents live in Campbell River, which somehow managed to recover nicely after being staggered by a series of economic body blows over the last dozen years, when a total of 3,000 resource jobs — mining, sawmilling, the giant Elk Falls pulp mill — disappeared in quick succession. Nearby, the 15,000 residents of Comox, with its air force base and pensioners, have largely been insulated against the vagaries of that economy.

Up at the north end, ties to the resource roller coaster are more direct, which is tough when the salmon fishery remains in crisis and fish-farming is contentious. When Port Alice’s cellulose mill, which employed 400, went under in 2015, it was the equivalent of Victoria losing all its government and military jobs at the same time. The “I heart forestry” banners displayed in public places in the north Island show the industry’s importance to the economy, but also signal that others don’t share the sentiment. (Hullo, Fairy Creek!)

The thing is, in some ways the gap between the two ends of the riding might be narrowing. No matter where they live, ask people on the street what matters to them in this election and the answers are largely the same: climate, the natural world, jobs (including the current labour shortage) and, increasingly, affordability.

“The cost of living has really gone up,” says Sharie Garner, behind the counter of the general store in Woss. “Usually it’s incremental so you don’t notice it that much, but now it’s fuel, groceries….” The 65-year-old had hoped to wait until age 70 to start collecting her Canada Pension Plan benefits, but isn’t sure about that now.

In the parking lot of the Comox Valley’s Home Depot, Black Creek’s Shelley Roemer says housing is her biggest worry. She has one 20-something son at home and another sharing a place. “I can’t believe the price of rentals.”

The real estate market is red hot. The benchmark price for a home in Campbell River jumped from $312,000 five years ago to $480,600 twelve months ago, then soared to $639,100 today. “I’ll get at least a couple of calls a day from out-of-town people,” says Parallel 50 Realty’s Dan Geneau in Campbell River. Many buyers come from the Lower Mainland, others from the Okanagan and Alberta. Lots of Victorians looking for a small-town feel. Lots of retirees and a surprising number of young parents with an entrepreneurial bent. On this day, he has just shown a $2-million ­property to an American couple.

What’s new is that the rise in prices has spread into new territory. “The northern end of the Island is absolutely booming,” Geneau said. Sayward. Port Hardy. His office just sold a Port Alice property for $2.2 million. There were multiple offers. Even in Woss, Garner spoke of retirees snapping up homes that once belonged to loggers.

It’s all relative, of course. Small-town homes are still a bargain compared with the cities. And the lifestyle is a magnet.

“I moved from the Lower Mainland four years ago and I’m never going back,” says Tim Hilliard, waiting for the ferry to take him from Port McNeill home to Alert Bay.

The 39-year-old carpenter’s daily commute involves that 35-minute ferry ride, plus a half-hour drive to Port Hardy, where he’s helping build a new spill-response facility. If that sounds like a haul, he says it’s nothing compared with the stress of his old commute in the Lower Mainland: a one-hour drive each morning that would grow to 2 ½ hours on the homeward leg.

Hilliard and his his wife, a member of the ‘Namgis First Nation, decided to move to Alert Bay after they grew concerned that her two boys weren’t learning Indigenous ways in Vancouver. Indigenous life plays a prominent role in North Island-Powell River, particularly in its remoter reaches.

That’s illustrated by Cecil Brown, a ‘Namgis man waiting for the same ferry as Hilliard. In Victoria, the sea is our backdrop, but in Alert Bay it surrounds you, is an integral part of where you carry out your life, he says. The other day, he was on hand when a fishing boat pulled in with maybe 1,000 salmon to distribute among members of the community. It’s a big deal each year when the boats come back from Knight Inlet with the community’s annual supply of oolichan grease.

Brown’s Alert Bay neighbours include Michael Beddoes and Sandra Zacharias, who arrived from Vancouver two years ago, and who extol the virtues of “post-industrial” communities that have embraced retirees such as them.

It’s not all idyllic, though. Opportunities for young people are limited. That’s one reason why aquaculture, and Ottawa’s decision to close 19 open-net fish farms on salmon-migration routes through the Discovery Islands by next summer, has been so contentious. Hilliard knows families in which some members are resolutely opposed to fish farms, while others depend on them to eat.

It’s one of the issues with which the next member of Parliament will have to wrestle. Competing for the seat are New Democrat incumbent Rachel Blaney, who has held the seat since 2015; Conservative Shelley Downey, a Port McNeill municipal councillor who also ran in 2019; Comox human rights lawyer Jessica Wegg for the Greens; and Jennifer Grenz, one of three Indigenous women running for the Liberals on Vancouver Island. Rounding out the ballot are Paul Macknight of the People’s Party of Canada, Marxist-Leninist Carla Neal and the Maverick Party’s Stacey Gastis. 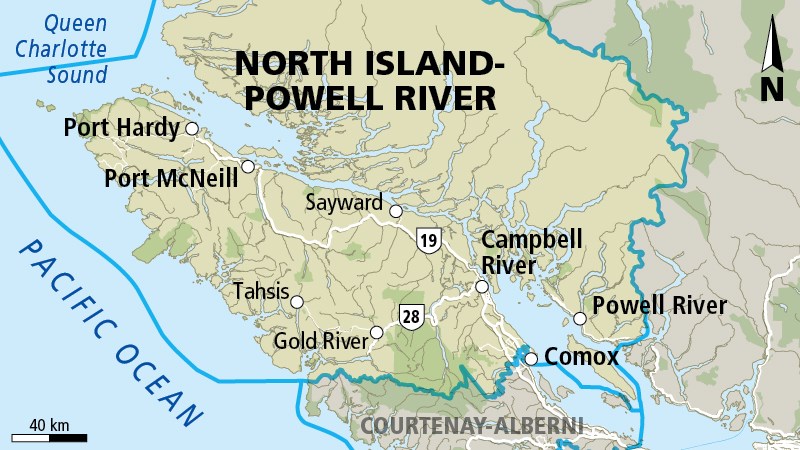 North Island-Powell River is similar to the old Vancouver Island North constituency that existed prior to the 2015 election.

Municipalities include ­Campbell River, Comox (but not Courtenay), Port Hardy and Port McNeill. On the mainland, it includes Powell River and a huge swath of sparsely populated territory to its north.

• In the past: New Democrat MP Rachel Blaney won the seat with 38 per cent of the vote in 2019. Conservative opponent Shelley Downey, who placed second with 33 per cent, is running again. The Greens polled 14 per cent and the ­Liberals 13.

Prior to Blaney’s victory in 2015, John Duncan, representing the Conservatives (or its Reform Party and Canadian Alliance predecessors) had held ­Vancouver Island North for 20 of the ­previous 22 years.

Jack Knox: A waiting game in Nanaimo-Ladysmith as candidates decompress
Sep 22, 2021 6:00 AM