Trio Ready-Mix Ltd.’s decades as an industrial operation in Cordova Bay may be winding up now that the McLaren family has put its 26-acre site up for sale at $11.5 million.
Carla Wilson
Nov 28, 2013 9:48 PM

Trio Ready-Mix Ltd.’s decades as an industrial operation in Cordova Bay may be winding up now that the McLaren family has put its 26-acre site up for sale at $11.5 million.

The company will continue its existing ready-mix plant and pre-casting facility that has been on the Esquimalt Reserve for eight years, company general manager Ian McLaren said Thursday. Its Gravel Mart and landscape supplies operation will move to another site. Details are not yet available.

At 773 Cordova Bay Rd., the property is being marketed by Colliers International’s Victoria office as a development site. Under a 1999 rezoning, 110 residential units could be built on 12 acres on the southeast part of the site. The northern 6.79-acre portion was to be used for a mini-storage facility which wasn’t built. Another 7.46 acres is green space on the southwest section and is designated for park use.

Tensions have existed for years between neighbours and Trio over issues such as trucks, odour, noise and land use.

Trio was founded in 1966 by Bruce McLaren, Colin Blythe and Cy Gillingham, said Bruce’s son, Ian McLaren. His mother, Diane, is company president and brother, Mark, is head of sales. Bruce McLaren and Blythe had been friends since childhood and had always wanted to go into business for themselves, Ian said. Poor health in 1971 prompted Gillingham, who had worked with Blythe, to sell his share to the other partners.

Shortly after Bruce McLaren died in 2001, the McLaren family bought the Blythe family’s share in the business, said Ian, general manager since 2000.

Gravel has not been mined from the site since the early 2000s, Ian said. Fill has been brought in to remediate the site and that process is nearly complete, he said.

The McLarens decided not to develop the site because “it is really not our area of expertise,” he said.

Trio has 25 workers, who will remain with its two operations, McLaren said.

Ty Whittaker of Colliers said the land has been on the market for two weeks. “The development community is reacting very well to it. There’s certainly interest from a number of parties,” said Whittaker.

Cordova Bay is a desirable community in Saanich with multi-family and single-family housing, including luxury properties. The neighbourhood features Mattick’s Farm and two golf courses. Residents are also served by the Cordova Bay Plaza, anchored by Tru Value Foods, and the Beach House Restaurant.

Trio’s rezoning bid was approved with conditions that the plant be relocated, Saanich Mayor Frank Leonard said. Anyone interested in developing should first talk to the local community association, he said. 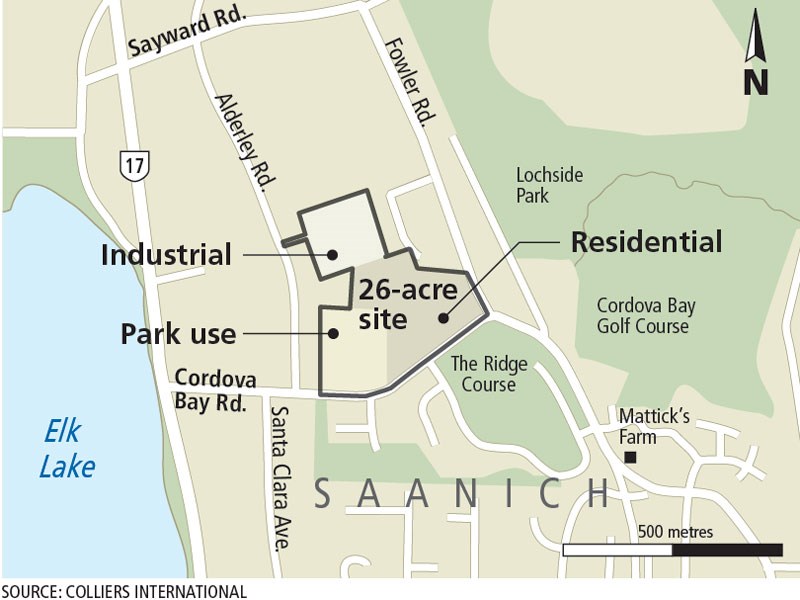