If you think you’re seeing more seagulls perched in downtown Victoria rather than soaring over the Salish Sea, you’re right.

Until recently, seagulls had been safely nesting on Great Chain Island off Oak Bay, once one of the largest breeding colonies for gulls in the world, said Ann Nightingale.

Thanks to the elimination of the pesticide DDT in their food chain, there are now 15 to 20 breeding pairs of hungry bald eagles on southern Vancouver Island able to reach the colony and raid eggs and chicks. The eagles are also strong enough to capture and kill seagulls mid-flight.

“The gulls are actually in decline,” Nightingale said, even though the downtown situation might suggest the opposite. “There are a lot fewer of them than there were, say, 20 years ago.”

Gulls can live for more than 20 years and have learned that nesting off Oak Bay has become dangerous, Nightingale said. They’re smart enough to figure out that they should nest where eagles don’t want to go — and that is downtown, she said.

The downtown gulls have nested on roofs in the core and their numbers are peaking now, she said. For every successful nest, there are a breeding pair and two or three chicks.

Instead of flying all over the place seeking food and leaving their droppings as they go, parents hang close to their nests, joining their offspring in leaving copious amounts of guano. Chicks defecate more than adults, and they do it in one spot, right downtown, Nightingale said.

Out of 12 species known to visit Victoria, the glaucous-winged gull is the only species that breeds locally.

Food supply is another major reason for diminishing gull numbers. As omnivores, gulls are “the vultures of the coast” — able to eat anything that washes up on shore. With climate change and declining fish stocks, the gulls find less to eat on shore, but more to scavenge from human refuse on city streets and near waste receptacles.

“We wrecked the balance by using things like DDT,” said Nightingale, who is co-president of the non-profit Rocky Point Bird Observatory.

“It is nature taking its course, but with a decidedly human influence on it.” 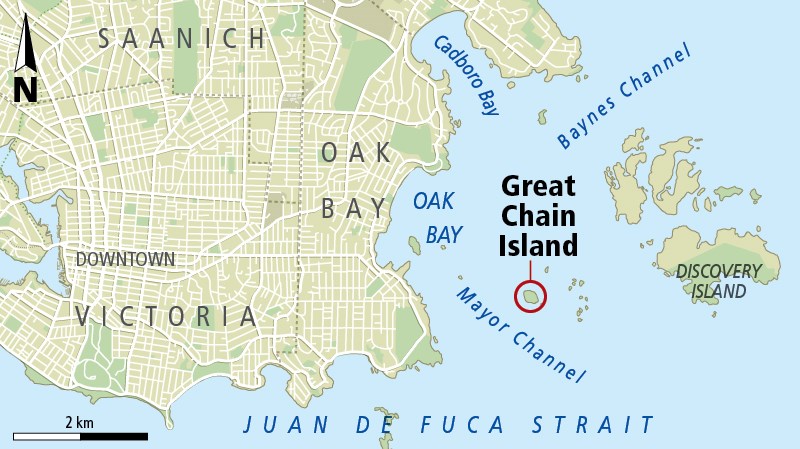