Property assessment notices, which will be filling mailboxes around the province starting this week, are a good snapshot of another point in time, but definitely not reflective of Greater Victoria’s current real estate market, according to experts.

The roll, released Wednesday by B.C. Assessment, showed the average residential property value increased by as much as 20 per cent in the region.

“I don’t think that reflects the existing market. It’s a snapshot of July, but the existing market suggests housing prices have flatlined,” said Casey Edge, executive director of the Victoria Residential Homebuilder’s Association.

Kyle Kerr, president of the Victoria Real Estate Board agreed, noting the assessments accurately reflect what was happening in the summer when most of the price growth in the market occurred.

“Since the summer, we have definitely been flat, though there have been slight decreases in some areas and slight increases in others,” he said.

There should be no surprise in the assessment figures lagging behind the market, as it is an estimate of a property’s market value as of July 1, and physical condition as of Oct. 31.

According to B.C. Assessment, changes in property assessments reflect movement in the market and take into account current sales in the area as well as the size, age, quality, condition, view and location of a property.

“The majority of residential homeowners within the region can expect an increase up to 20 per cent as compared to last year’s assessment,” said Vancouver Island assessor Tina Ireland.

But statistics released Wednesday by the Victoria Real Estate Board in its year-end review suggest the days of 20 per cent increases in value might be a thing of the past. The numbers show a marked slowdown in the market with 7,150 properties changing hands in 2018, a 20 per cent drop from the 8,994 sold in 2017. In December, there were 375 sales of all property types, down from 462 in the same month in 2017. 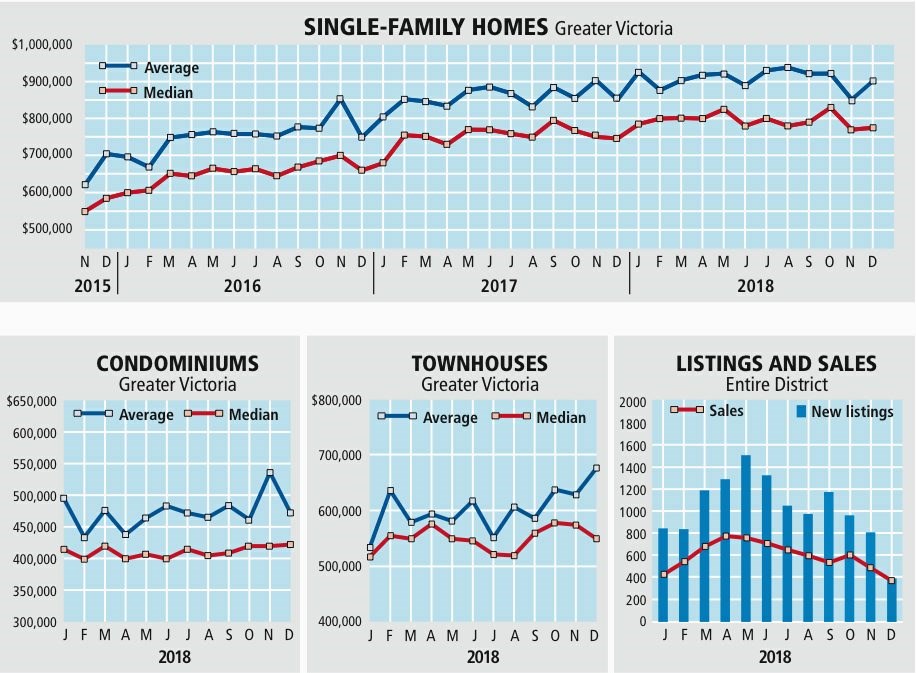 At the same time, sale prices for homes in the region remain ahead of marks set in 2017, with the benchmark price of a single-family home sold in the region in December hitting $751,700, compared with $715,200 in December 2017.

The number of properties for sale was also up at the end of the year with 1,988 active listings in December, an increase of 43.6 per cent over the 1,384 listings for sale at the end of December 2017.

Kerr said the market, which has been subject to a lot of government involvement over the last year, is in transition and as a result he expects 2019 to be a flat year for real estate with sales likely to hover around the same level as the end of 2018.

“But at the same time I don’t see the market falling off a cliff,” he said. “Demand is still too strong.”

Kerr said a strong economy and desirable climate will mean Victoria remains a destination city for many Canadians.

Edge agreed, though he was quick to suggest home prices could see a drop in the near term.

“Where sales go, prices will ultimately follow,” he said. “The prices you’re seeing [on property assessments] are not in sync with the existing market.”

He noted in the cases of properties with assessed values around $1 million in places such as Saanich, the value of the home is as little as $100,000, while the price of land makes up the vast majority of the price.

“In order to build homes on [speculation] you have to have affordable land,” Edge said.

“Builders will be very cautious on moving forward on that kind of building unless you can get the density to build more affordable homes.”

The result could be a drop off in homebuilding this year.

Edge said that’s already started, as there were 910 single-family homes started in the region in 2016 and through 11 months of 2018 there were just 775 coming out of the ground.

“The good news is we’re still building and we haven’t seen these kinds of numbers since the 1970s,” he said. “The downside is we are in a risky environment with these high land costs. Nobody wants to get caught in a situation where they’re sitting on homes that can’t be sold.”

While there might be a change coming, there’s no question the value of property on Vancouver Island has increased.

The entire Island roll of 371,000 properties increased in value to $246.9 billion from $222 billion in 2018. Nearly $3.9 billion of Vancouver Island’s assessments reflect new construction, subdivisions and rezoning of properties.

According to B.C. Assessment, 98 per cent of property owners accept their assessment. Those who dispute their assessments may submit a notice of complaint by Jan. 31 to ask for an independent review by a property assessment review panel. The panels typically meet between Feb. 1 and March 15.

Increases in assessments do not necessarily mean an increase in property taxes, Ireland said. “How your assessment changes relative to the average change in your community is what may affect your property taxes.”

Property assessments expected to rise despite real estate cooling off
Dec 6, 2022 3:30 AM