The day after we arrived in Honolulu, my husband spied in the newspaper a local 10K race. With him being a cyclist, the fact that the event also featured 35K, 75K and 100K bike rides made us both pause mid-Mai Tai.
Denise Helm Feb 8, 2013 8:38 AM

The day after we arrived in Honolulu, my husband spied in the newspaper a local 10K race. With him being a cyclist, the fact that the event also featured 35K, 75K and 100K bike rides made us both pause mid-Mai Tai.

Despite the fact I brought my running gear on vacation and my hubby rented a road bike for the week, neither of us are hard-core.

We pursue our individual sports so we can eat, drink and be merry rather than be on the front of a cereal box. Our lives are busy with a young daughter, an older son and his young family, aging parents, friends, work, the house, the yard, volunteering and bills – it’s no wonder we are happy to stretch out under the soothing warm sun and forget about responsibilities.

Why even think about entering a race? I was not ready for one, especially in the heat, and I certainly wouldn’t be curtailing activities on or off the beach to rest my legs or god forbid, eat healthy. Holidays are for breaking rules, not for personal bests in races.

But I could’t resist the allure of this local event – a fundraiser for epilepsy – so I tracked down the race-package pick-up at a local taco shop and signed up for the next day’s race. The best I can hope for is being hydrated from beer and gin-and-tonics.

I already figure that this is going to be a race to remember. Taco-shop pick-up?  Hawaiin royalty help me with my race T-shirt? 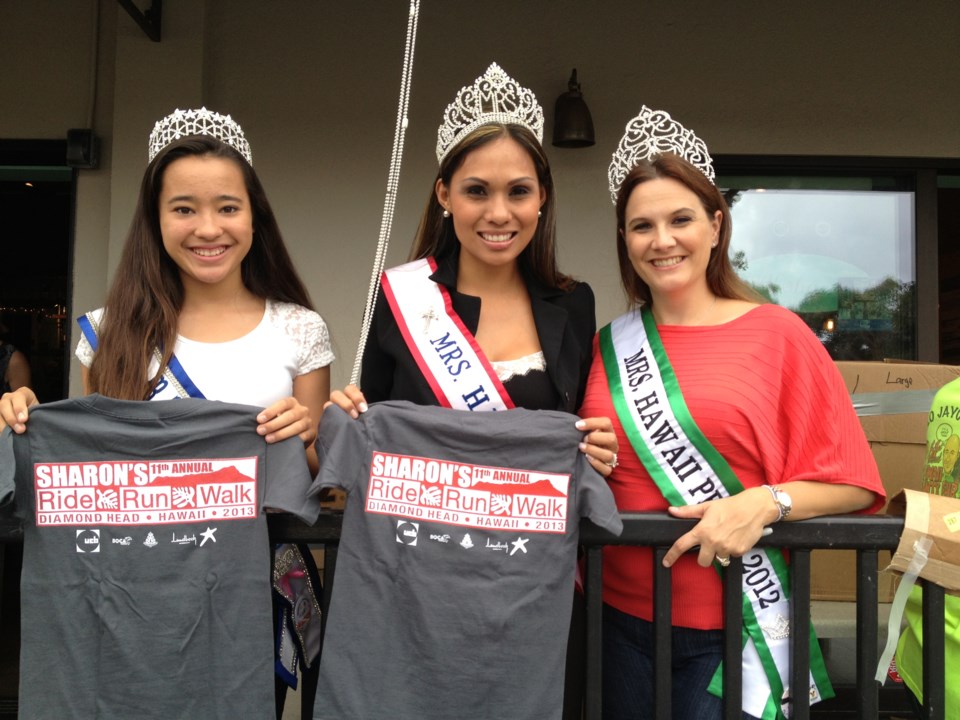 Royal helpers at the race pick-up at local taco restaurant

The 11th annual Sharon’s Ride/Run/Walk is held in memory of nurse Sharon Rosenfeld, a nurse and teacher who cared deeply about epilepsy and epilepsy patients, and who was killed during a cross-country bike ride in 1993. Events are held in seven cities with the one in Hawaii extremely well organized and populated with friendly, enthusiastic volunteers.

The family-oriented day in Honolulu is small with about 600 people registered for a 5K run, 10K run and the cycling events. I realize that rather than worry about getting trampled in a crush of people, I’d better keep up so I don’t get left behind and lost on the route, losing sight of the runners ahead of me.

I arrive on race morning, well rested from kilometres of walking at the Ala Moana Mall the previous afternoon and the evening’s NFL Pro Bowl block party with seven stages and 100 street booths that take over Waikiki’s main street. 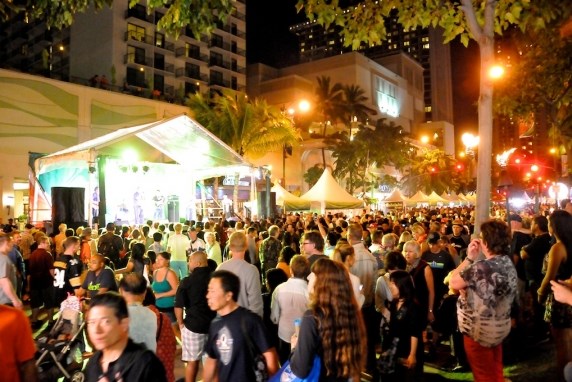 A little rest-and-relaxation the night before race day

Even better, I find out the race route starts with running uphill into the Diamond Head crater. Sounds lovely – for a postcard.

Thankfully, I had stashed contact information in my water belt in case I collapse and passers-by need to find my husband who decided to skip the race and ride up-Island on his own that morning. Smart man.

Like at the start of any race, I’m both nervous and excited, jostling for a decent place in the crowd.  It’s a timed event but there is no timing mat at the start, only a neon-orange line spray painted on a walk path. Did I mention it’s a small race?

In what was the best start I’ve experienced – a Hawaiin elder blessed us and blew on a conch shell as the clock ran down and we crossed the start line.

Having decided I definitely wasn’t setting any time records and this race was about participating, I tried to relax and enjoy the scenery. But it’s hard to dampen a competitive spirit. 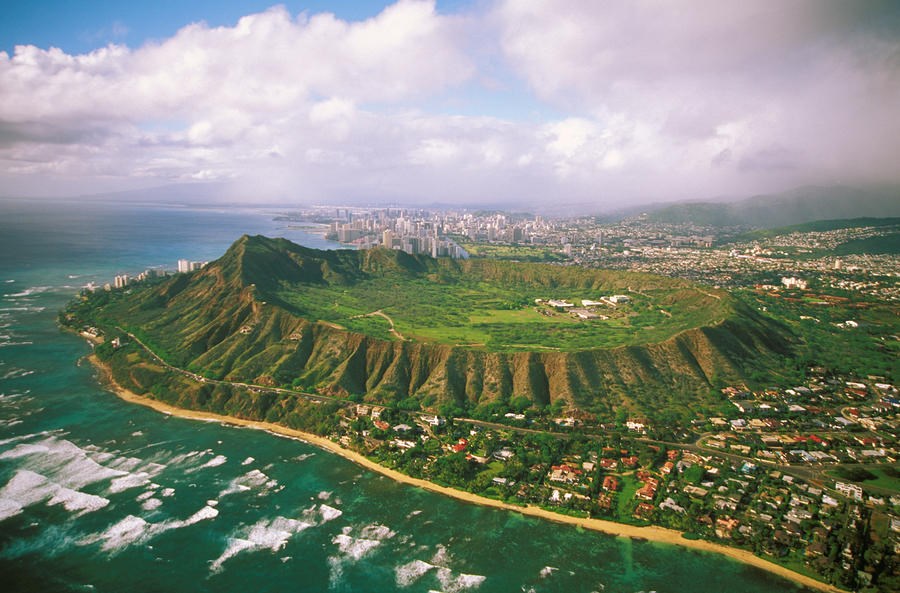 Yes, it's beautiful. But do I really have to run up into the crater?

The first kilometres in and out of the crater weren’t so bad but as we hit the neighborhood streets and the kilometres spooled out, I knew the sweat dripping off me wasn’t just about the heat.

And where were those damn front runners who should be passing me in the opposite direction, heading back to the start/finish line? The longer it takes for me to see them, means the longer it is to the turnaround.

Like any race, run in any city, at some point you reach the fulcrum, the energy shifts, the momentum is with you, until of course that last stretch when it’s more about grit and defying gravity.

And so it was  down the home stretch to the Kapiolani Community College parking lot, where in the final 30 metres with the encouragement of the race director with a megaphone, I pass a guy at the finish line. He wasn’t so young or fast. Did I mention it’s a small race?

The best was yet to come because at the refueling table (not much bigger than a large kitchen table), I met Rosie, sporting lime-chili-pepper shorts. 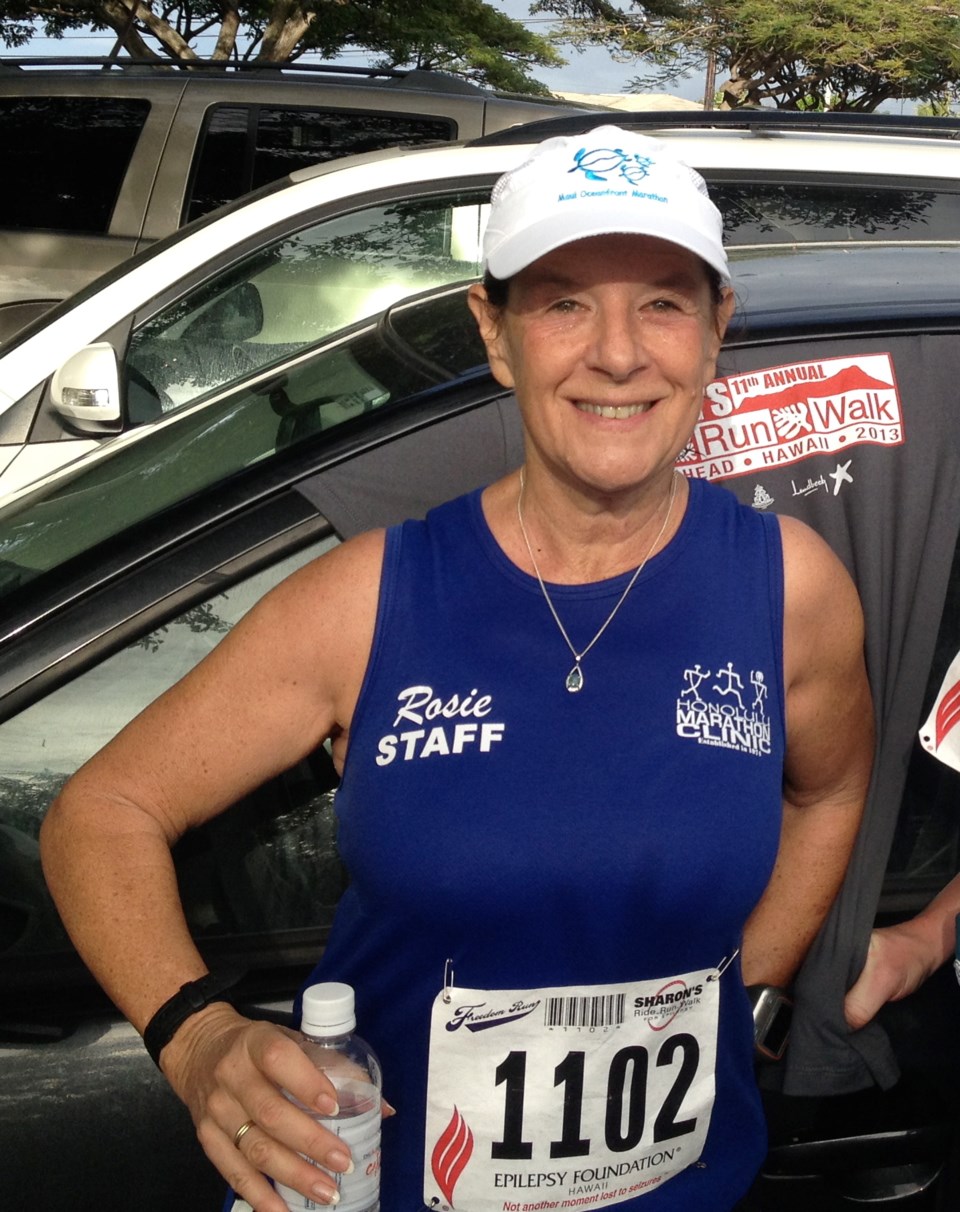 In a state of endorphin-induced camaraderie, I started yakking with her. It’s a post-race need of mine. To talk about the race, celebrate or groan. Slipping into a language that would bore any non-runner into a stupor, we talk about training, how we started running and how long ago, running routes around the city. She even retrieves a map book from her car and gives it to me to keep so I can find my way to Tantalus – a popular hiking/cycling/running area in the hills above Honolulu.

I meet her friends who also ran the 10K. They had all done the Maui marathon the previous weekend. Having found out Rosie was 62, I was feeling somewhat sloth-like. Then another knot of people wave me over to their group to meet a fellow Victoria runner – Diana George – whose ripped body accurately matched her second-place finish in that Maui marathon. She was also the top female finisher in this 10K.

For myself, I was content with simply running a local race, having fun and meeting new friends. For me, that was a personal best.

(Oh, and by the way, I got a medal as the second-place finisher in my age category. A feat never before achieved and unlikely to be repeated. Did I mention it’s a small race?) 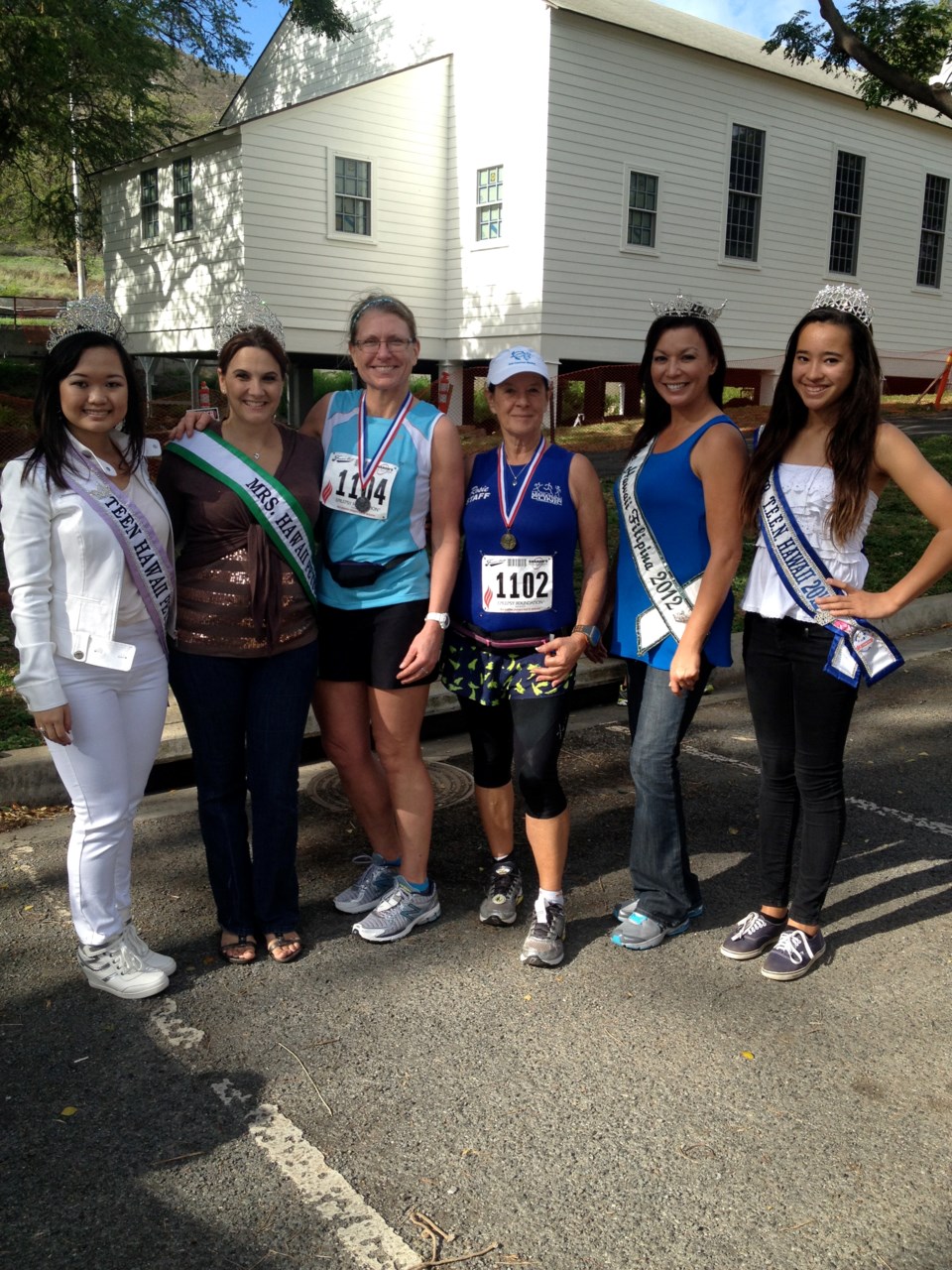 Comment: Justification for bombing Hiroshima and Nagasaki doesn't stand up to scrutiny
Aug 11, 2022 3:55 AM