Beautician on a Mission... 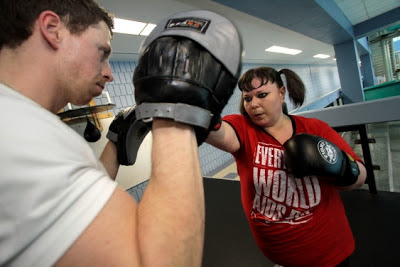 Suzie Spitfyre loves everything in life to excess.

After loving food a little too much for 13 years, and topping the scales at 292 pounds, she’s now learning to love a tough workout plan and regime of healthy eating.

One day, her bangs and short braids frame dramatic eye makeup. Another day, when she needs a boost, she’ll break out the war paint and do her face like a warrior.
She’s feeling pretty good right now, having lost 12 pounds just two weeks into the 12-week program.

“I’m probably more comfortable now in my skin the way I am — as unhappy as it makes me every now and then — because I know who I am,” Spitfyre said.

“When I was 109 pounds in high school, I was just terrified that I was fat.”

She got a bachelor of arts degree in classical archaeology from Simon Fraser University and has worked at excavations in Malta and Ireland.

She left Europe for Montreal in 1999 and blames seven years immersed in the city’s food and party scene for most of her weight gain.

“Montreal is a pretty awesome party city,” she said.

She revelled in the attention of promoting musicians and, with it, enjoying lots of food and drink.
“Poutine is the best thing ever,” she said. “I loved everything to excess.”

Her mother, a dietitian, expressed concern for her daughter’s health. Spitfyre said she’s the only overweight member of her family.

“I had everything going for me and it was my choice to be terrible with food. I’m the star pupil of whatever this is I’ve created.”

She’s far from self-pitying, saying, “What’s really important for me is I don’t regret things. It’s all a learning experience for me.”

She gained the excess pounds and says she intends to lose it again. Her enthusiasm for the task at hand saturates her environment, and it’s getting a strong response from her friends.

“What really has affected me through this whole process are all the people I didn’t know who were already in my corner — they’ve come out and said, ‘You go, girl!’ ”

Her twice-daily workouts are even inspiring her already-active friends to step up their game.
“My cousin’s husband sent me this beautiful note saying, ‘Some of the guys at my fire hall are kind of big so we’ve got together and we’re doing [workouts],’ ” she said.

She’s been working out at the Crystal Pool, where strangers recognise her from Times Colonist articles.

“People keep grabbing me and saying, ‘Are you the lady from the newspaper?’ I go, ‘Yes I am — form a line, autographs at 11.’ It’s hilarious.”

The exercise is already showing benefits. She can climb the stairs to her apartment without getting winded, and her body is changing.

“Look! I’ve got a dent here,” Spitfyre said, pointing with glee to what appears to be a waistline.

“And I think that my boobs are actually bigger than my stomach.”

Aside from the physical changes, her energy has increased and she feels “amaze-balls. I’m pretty chuffed.”

Her husband, Stéphane, is supporting Spitfyre as she tackles this big life change.

“He has a bit of a beer gut but he’s got really nice legs,” she laughs.

Her goal is to lose 30 pounds over a month, 50 pounds over the 12-week program, and eventually drop 150 pounds.

She’s on leave from her work selling and applying cosmetics and hopes the Times Colonist Health Challenge will get her back on track.

She loves applying makeup, saying, “I change people when they come in to see me. When I’m at work, I empower people to feel beautiful and to know that they are beautiful.”

She has to learn to discover the beauty in herself, she said.

“I’m not doing myself justice. I have a style now that’s dictated by the blobbularness of my body.

“Every day now is an opportunity to have fun and just go out there and get what I want. I want to be an active person and feel awesome in my clothes.”

Comment: Justification for bombing Hiroshima and Nagasaki doesn't stand up to scrutiny
Aug 11, 2022 3:55 AM