Where salmon, recreational fishing will be closed to boost orcas

Federal officials have shut down salmon and recreational fishing for the summer in key feeding grounds for killer whales.
Lindsay Kines Jun 2, 2018 6:00 AM
Previous Next
1 / 1 A female resident orca whale breaches while swimming in Puget Sound near Bainbridge Island as seen from a federally permitted research vessel Saturday, Jan. 18, 2014. The federal government is closing some recreational and commercial chinook fisheries on the West Coast in an effort to help save endangered southern resident killer whales. THE CANADIAN PRESS/AP-Elaine Thompson
Expand
Previous Next

Federal officials have shut down salmon and recreational fishing for the summer in key feeding grounds for killer whales.

The closures, which took effect Friday, apply to parts of the southern Gulf Islands, portions of Juan de Fuca Strait, and areas around the mouth of the Fraser River. It’s the latest move by the Department of Fisheries and Oceans to protect the endangered southern resident orca population by conserving their favourite food — chinook salmon.

“Wild populations of chinook salmon have declined dramatically in recent years,” the department says. “This lack of prey has been a critical factor in the decline of southern resident killer whales.”

The population has dwindled to 76 whales and federal Fisheries Minister Dominic LeBlanc recently stated that the species faces “an imminent threat to its survival and recovery.”

In response, the department announced a plan last week to reduce the coast-wide harvest of chinook by 25 to 30 per cent this year.

Few details were released at the time, but the department now confirms that recreational fishing and commercial salmon fishing will be closed until Sept. 30 in parts of Juan de Fuca Strait off Vancouver Island west of Otter Point, and in the waters south of Galiano Island around Mayne, Saturna and Pender islands. You can find more details from DFO here [link]. 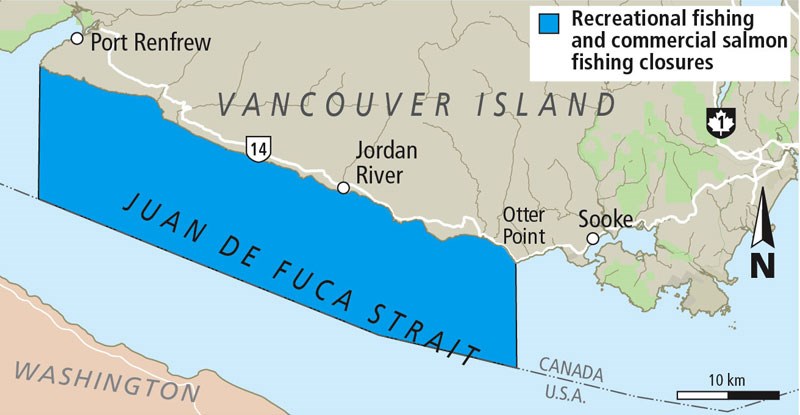 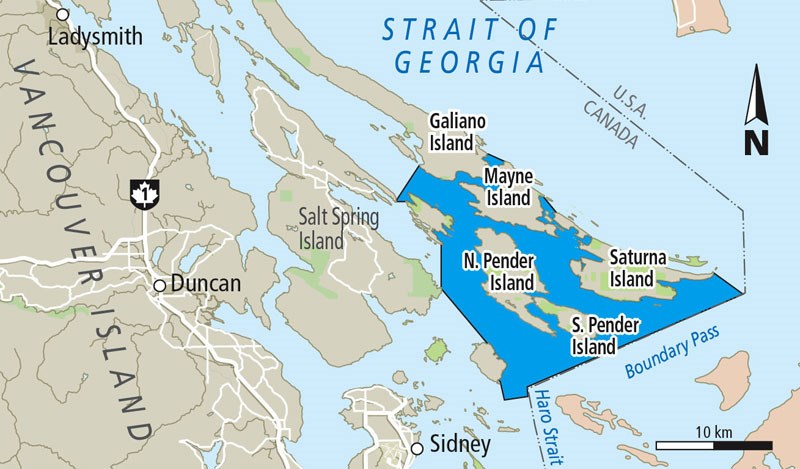 New catch limits for chinook will take effect in other regions.

Rebecca Reid, regional director general for DFO, said the closures will make more chinook available for the whales and allow them to hunt in peace without being disturbed by commercial and recreational fishing boats.

She said the strategy has the added benefit of potentially helping both the whales and the salmon.

“We have significant conservation concerns for chinook in addition to our concerns about southern resident killer whales,” she said.

“So any fish that aren’t caught by the whales will be able to get back to their streams and spawn, which will be beneficial as well.

“It’s kind of a dual strategy: Make them available and if they’re not harvested by the whales, allow them to return to spawn.”

Owen Bird, executive director of the Sport Fishing Institute of B.C., expressed disappointment with the extent of the closures and the absence of other strategies to protect chinook and whales.

He said the federal plan ignores the effect of boat traffic, noise and pollution on the health of killer whales. Officials should also be looking at efforts to build chinook stocks and investigating the impact of seals and sea lions in the Strait of Georgia.

“In isolation, to just stop recreational fishing in those areas, will do precious little for the killer whales and very little for chinook,” he said.

“What we’ve got is a situation where it may look good to the casual observer, but in fact it is tremendously damaging to small communities, to business, to the sport-fishing community generally.”

Christianne Wilhelmson, executive director of the Georgia Strait Alliance, agreed that more needs to be done, but she said the fishing closures are a welcome first step.

“Hopefully, this will help,” she said. “This is going to have to be, in our opinion, an ongoing thing. This is not something that will be solved in one summer.”

She echoed Bird, however, in calling on the government to deal with other issues, as well.

“We agree that we need to see action on disturbance,” she said. “There has to be more restrictions on whale-watching. We have to have better rules and education for recreational boaters. We also have to see some changes from the big ship community, because noise in the strait is also [an issue].”

Note to readers: A previous version of this story did not make it clear that only part of Juan de Fuca Strait, west of Otter Point, is affected by the closure.

Witnesses report woman pushed on Oak Street sidewalk in random attack
May 27, 2022 10:01 AM