Transit riders can expect to shave a few minutes off their daily commute to downtown Victoria next year once work concludes on a new leg of the southbound bus-only lane along Douglas Street and the Trans-Canada Highway.
Lindsay Kines Jun 18, 2019 6:00 AM
Previous Next
1 / 1 Construction starts this week on extending the southbound bus lane on Trans Canada Highway and Douglas Street. June 2019ADRIAN LAM
Expand
Previous Next

Transit riders can expect to shave a few minutes off their daily commute to downtown Victoria next year once work concludes on a new leg of the southbound bus-only lane along Douglas Street and the Trans-Canada Highway.

The federal and provincial governments announced Monday that construction will begin this week on the 2.3-kilometre stretch of the bus lane from the overpass at Burnside Road and the Trans-Canada Highway to Tolmie Avenue.

Once the section is finished, bus-only lanes will run north and south for 4.4 kilometres from Fisgard Street to the overpass.

The northbound lane was finished in December.

Transportation Minister Claire Trevena was unavailable for an interview Monday, but said in a statement that the bus lanes will allow transit riders to get places faster than they would in a car.

“We expect the two-way continuous corridor between Fisgard [Street] and the Highway 1-Burnside Road overpass will encourage more people to use transit and, in turn, help reduce congestion and greenhouse-gas emissions,” she said.

The Better Transit Alliance of Greater Victoria welcomed the announcement, but expressed dismay at the time it’s taking to extend the bus lanes to the Colwood turnoff at the Old Island Highway in View Royal.

“It’s really good that it’s happening,” said Eric Doherty, a founding member of the alliance. “It’s a fabulous project, but it doesn’t quite cut it in the climate emergency to be doing tiny little segments of bus lanes.

"Also, it doesn’t really cut it in the climate emergency that most of the money that the provincial government is spending in the region is going to highway expansion projects, not to transit expansion projects,” he said, referring to announcements about upgrades to Highway 14 and the Trans-Canada Highway.

Doherty said he’d prefer to see the government do “really big chunks” of the bus lanes and award contracts to complete them all the way from the McKenzie interchange to the Six Mile Pub area.

“Get it built all at once, get it efficiently done,” he said. “They are spending a lot of money on things that are mostly for the private automobile and that just isn’t going to get us to meeting our climate targets.”

Saanich Coun. Susan Brice, who chairs the Victoria Regional Transit Commission, said the bus lanes are already paying dividends for commuters. The Transportation Ministry reported in December that the northbound lane was saving riders 10 minutes from Fisgard to Tillicum Road.

“That is good for the riders, but also for transit because we can use our vehicles more efficiently and use them in different ways, not having them stuck in the congestion,” she said.

Brice said the commission hopes that drivers stuck in traffic will see the buses gliding past and decide to give transit a try.

Provincial statistics show that about 1,700 vehicles travel the Douglas Street corridor per hour at peak times. B.C. Transit moves about 40 per cent of the people on the route during those hours, while accounting for three per cent of the vehicles, the government says.

“It’s great news that they’re getting on with it,” said View Royal Mayor David Screech. “Every leg is important. That’s going to make a difference for sure and hopefully we’ll hear soon about the bigger stretch from the Thetis interchange right to Burnside.”

Screech said he has been given no indication when that project might go ahead. “But I didn’t actually know that this was going to be [announced] quite so quickly, so I think that’s encouraging.”

The Ministry of Transportation said most of the construction on the southbound lane will be done in off-peak hours to minimize delays for commuters.

There will be no lane closures on Sundays, holidays or any time from 5:30 a.m. to 8 p.m. Monday to Saturday. Evening work might require traffic stoppages of 20 to 30 minutes, the ministry said. 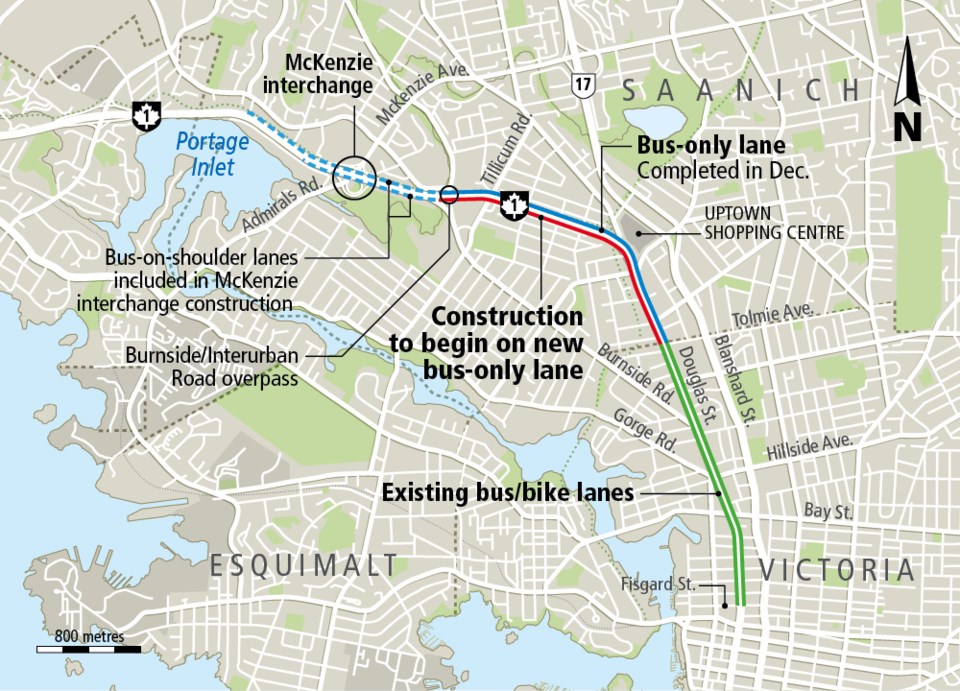