Victoria is pushing ahead with bylaw changes to prohibit overnight anchoring in the Gorge waterway despite some councillors’ concerns that the move will eliminate recreational boating options.
Bill Cleverley Jul 12, 2014 10:08 PM

Victoria is pushing ahead with bylaw changes to prohibit overnight anchoring in the Gorge waterway despite some councillors’ concerns that the move will eliminate recreational boating options.

“This should not be about gentrifying this corner of the city — telling a moderate-income mariner: ‘No, you can’t come into Victoria Harbour to overnight unless you have sufficiently deep pockets to pay a very steep moorage fee on a dock,’ ” said Coun. Ben Isitt in arguing against the bylaw change on Thursday.

If the concern is the waterway’s sensitive ecosystem, it would make more sense to ban anchoring at any time, not just overnight, Isitt said.

And, he said, rather than “coming in with a sledgehammer,” council would likely get greater community buy-in with a gradual approach of allowing boats to tie up at authorized buoys for a maximum of 48 hours.

The city has been working to find a way to deal with about a dozen boats, some derelict, anchored just northwest of the Selkirk Trestle off Banfield Park.

Residents in the area have complained of excessive noise from people living on the boats.

There have also been complaints that some of the boats are in poor repair and leaking fuel and oil, and that boaters are dumping sewage and are careless with their garbage.

City staff proposed the bylaw to clarify that the waterway is intended to be used primarily as a park and that liveaboards, float homes and overnight anchorage or moorage are not permitted in the area.

Coun. Lisa Helps said it was never her understanding that the city wanted to restrict recreational boating, so she was somewhat “puzzled” by the recommended bylaw.

“The motion that we made, in my mind, was very clear that it’s to prohibit long-term anchoring or permanent anchoring, but recreational boating is not what we were trying to prohibit,” Helps said.

Mayor Dean Fortin said there is nothing to prevent boaters from moving farther up Portage Inlet and anchoring there.

“It isn’t like we’re prohibiting it everywhere. It is just in this area right here,” Fortin said.

Simply prohibiting overnight anchoring in the area “is the most straightforward way” to deal with the issues surrounding the unregulated anchoring, said Rob Woodland, director of legislative services.

“Certainly, the determination of what is short-term recreational use — that could be day anchoring, that could be two nights, three nights, four nights — is an art and not a science,” Woodland said.

Coun. Shellie Gudgeon argued that the proposed bylaw is the simplest and cleanest way to deal with the issue of problem boaters and derelicts parked in the waterway.

“Overnight moorage has never been observed,” she said.

“This is long-term anchorage we’re worried about. … There’s opportunities of other places to do overnight moorage.”

In a report, city staff noted that there are several places in the city for people to tie up their boats.

Councillors gave two readings to the bylaw that identifies the area northwest of the Selkirk Trestle off Banfield Park to eliminate overnight anchorage or moorage.

A public hearing will be scheduled and both the Vic West and the Burnside Gorge neighbourhood associations will be consulted. 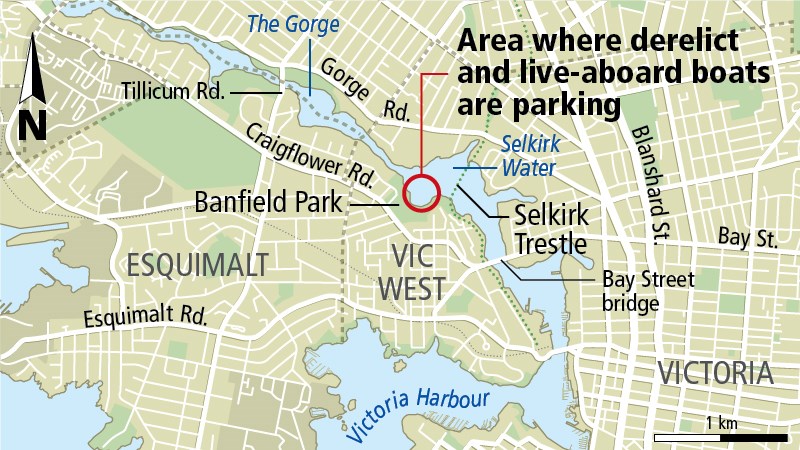