'I just felt it was necessary to do': Qualicum councillor donates kidney to First Nation chief

Monday will be a momentous day for Qualicum First Nation Chief Michael Recalma. It’s the four-year anniversary of the day his kidneys failed. It’s also the day he will receive a new kidney donated by Qualicum Beach Coun. Scott Harrison.

Recalma and Harrison are flying to Vancouver together for the procedure. “It is very humbling,” the elected chief said of Harrison’s gift.

The two knew each other through their political worlds and would run into each other at events. But now, “He’s turned into a great friend. Believe me what a gift. … I get another lease on life,” Recalma said.

After years of waiting and hoping for a donor, it feels “surreal” that it is finally happening, he said. “I’m not dreaming. … It is going to happen.”

As for Harrison, he said simply: “I just felt it was necessary to do.”

Recalma is a good man, he said. “He’s a lovely person. And he’s very well respected throughout the whole region.”

The 43-year-old councillor, who is single, was among several people who checked to see if they could donate a kidney to Recalma. After learning the two are the same blood type, Harrison embarked on about a year of tests before he was accepted.

“An interesting lens to the story is that I was adopted at birth, and discovered roughly one month ago that one of the people I’m descended from was involved in the decision to colonize Vancouver Island, namely John Pelly,” said Harrison, referring to the former governor with the Hudson’s Bay Company, who was in the role from 1822 to 1852. “While there is a great deal to think about having learned that, it does make this journey a bit more special.”

Harrison is the younger of the two. Recalma would not reveal his age, but spent 30 years working at a fish hatchery near his home and continues with a busy life as chief, even while on regular dialysis.

He felt unwell for a few days and at the urging of wife Sharon, he went to see the community nurse, who discovered his blood pressure was in the danger zone.

He was first taken to Nanaimo Regional General Hospital and then to St. Paul’s Hospital in Vancouver, where he learned his kidneys could not return to normal function. At the same time, Recalma went blind temporarily.

After returning home, Recalma went to Nanaimo hospital for dialysis and later did the procedure at home with Sharon once they received training.

The pandemic added to the challenge, because the delivery driver could no longer come into their home to deliver the 40 boxes of solution Recalma needed monthly.

That’s when younger members the First Nation stepped in to tote the boxes indoors.

Recalma later switched to dialysis at Port Alberni and now is driven to Cumberland for dialysis three times a week.

Recalma credits a sense of humour with helping him get through the past four years. He calls his dialysis a “four-hour cooking time.”

Recalma, who is triple-vaccinated, has to be extra-cautious because of his health. If he comes into the office and isn’t looking well, staff threaten to call Sharon if he doesn’t go home.

He has few in-person interactions and relies on Zoom and telephone calls for many meetings.

He said the past few years have shown him how much he is part of a larger community — the First Nation, the town of Qualicum Beach, family, friends from the past and more. Immediate family members were all tested for compatibility early on.

Many people watched a video he did for the Kidney Foundation’s educational program called Kidney Plugged In, where he is showcased on its YouTube channel.

Recalma can’t say enough about what Sharon, his caregiver, has gone through and how much she does for him.

“That’s what I think we’ll remember — Sharon’s watching me go through this all the time.”

Sharon’s belly-dancing group has been a support to both of them and members have performed for the video, he said.

Recalma’s nephew will perform a special ceremony at the airport, where family and guests will be on hand.

After the operation, Recalma and Harrison face a recuperation period. Recalma will remain in Vancouver, within an hour’s driving time of the hospital.

When he’s talking to people, he tells them: “Remember, dreams do come true.”

As for Harrison, he believes everyone has a role to play in making the world a better place, one that sometimes involves making sacrifices. “The central challenges we face all require far more than what simple solutions can offer and if we really want to solve them, we’re going to need to make sacrifices.”

He hopes people will take the time to think about what they can offer their community. 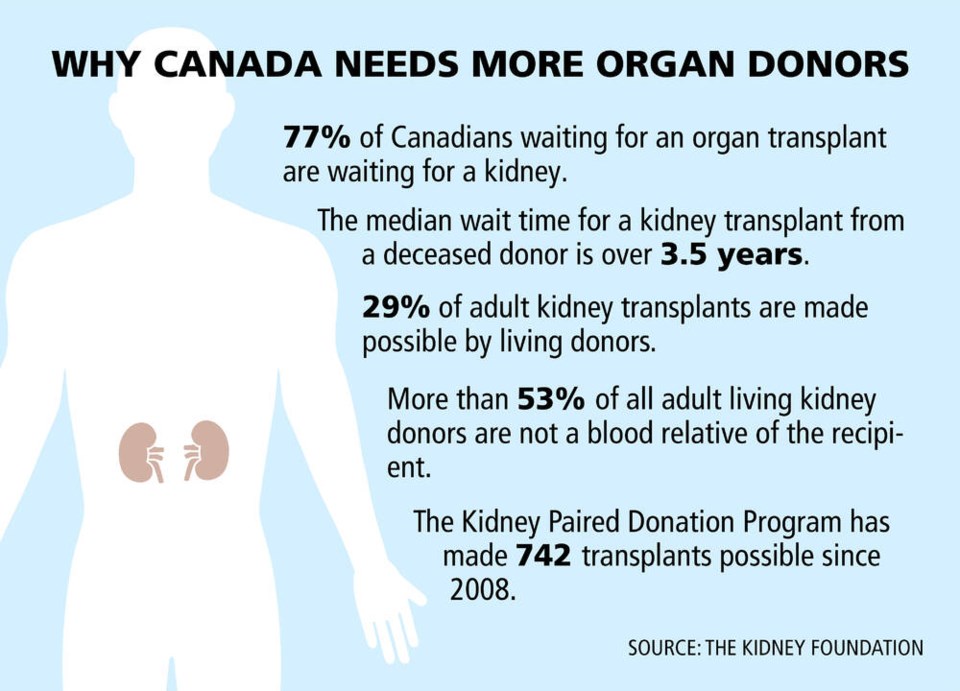 To comment on this article, write a letter to the editor: letters@timescolonist.com