Robert Gill credits his independence to his guide dog. Without his service dog, Gill would not be able to live on his own because he suffers from epileptic seizures and might be unable to summon help when a seizure hits.
Pedro Arrais
Jun 8, 2013 10:39 PM

Robert Gill credits his independence to his guide dog. Without his service dog, Gill would not be able to live on his own because he suffers from epileptic seizures and might be unable to summon help when a seizure hits. The last time it happened, he was unconscious for up to 30 minutes.

“After that seizure, I was fearful of living alone,” said Gill, who also has multiple sclerosis.

Naveed, his new guide dog, is trained to press an alarm button affixed to the floor within 10 seconds if Gill collapses in his apartment. A company that monitors the alarm in turn summons emergency personnel and neighbours to check on Gill. If he has an epileptic seizure outside of his apartment, the two-year-old black Labrador will sit beside him and bark until somebody comes to help.

Gill was in Ontario a few days ago to bring Naveed home from the Lions Foundation of Canada Dog Guides training camp. She was the 2,000th dog guide the foundation has provided at no cost to Canadians with disabilities.

Each dog is trained for a particular purpose. While service animals are more commonly known for aiding people who are blind or deaf, the Ontario camp also trains dogs for special skills, such as seizure response. The camp is currently developing a training program for dogs who can assist people with diabetes.

It costs an estimated $20,000 to $25,000 to train each dog, which includes the cost of flying the recipient to Ontario so they can to train them with the dog.

The foundation uses three breeds, Labradors, Golden Retrievers and standard Poodles. The latter are in demand by people who are allergic to fur.

“I can’t say enough about the foundation and the program,” he said. “When I was told I would be receiving the 2,000th dog, all I thought of was that they have given 2,000 people a chance at independence.”

For more information, go to dogguides.com.

Children at Carrot Seed Preschool in Saanich recently got a close look at local marine life as part of World Environment Day. Thanks to an expansion of the Seaquaria in Schools program hosted by World Fisheries Trust, students were able to touch animals such as the sunflower sea star, California sea cucumber and gumboot chiton.

The Seaquaria in Schools program has provided for the installation of more than 30 salt-water tanks in schools and nature houses across British Columbia. These tanks are stocked with local marine life and give students and educators an opportunity to meet some of the diverse animals that live in the ocean.

For the many schools that don’t have tanks, the World Fisheries Trust recently introduced a mobile touch tank. The mobile tank allows the Victoria-based non-profit organization to reach more students.

The program expansion was made possible with funding from Harbourside Rotary Victoria and TD Friends of the Environment Foundation.

For more information, go to worldfish.org. 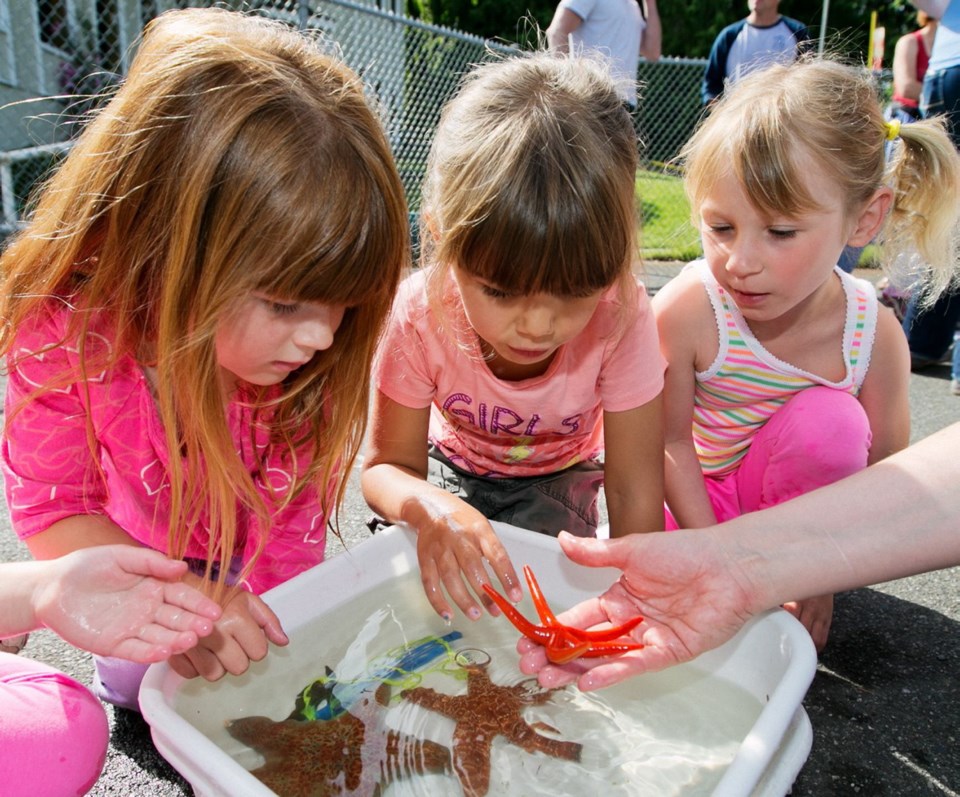 Students and educators recently celebrated a successful year for the West Shore Organic Teaching Garden, owned by School District 62 (Sooke) and co-ordinated by the YMCA-YWCA.

What began as a barren patch of land has evolved into a flourishing garden with produce grown by students. The harvest is sold at the Goldstream Station Farmers Market or donated to local charities, including the Young Mom’s Program at Kiwanis House.

The garden includes an orchard of apple trees, raised-bed gardens, herb beds, a perennial garden, a vegetable patch and a three-bin composter.

It is located at 2139 Sooke Rd., beside the WestShore Centre for Learning and Training and adjacent to the Colwood Elementary School.

Anyone can rent a raised garden bed for $20 a year. For more information, go to victoriay.com.

The two-day, 240-kilometre event begins at Canadian Forces Base Comox and ends in downtown Victoria Saturday.

Boomer’s Legacy is a foundation started in 2006 by Comox residents Maureen and Hans Eykelenboom in memory of their son, Andrew, who served as a medic with the Princess Patricia’s Canadian Light Infantry. Just before he was killed in action in August 2006, the 23-year-old corporal had asked his parents to send money so that soldiers could help people in villages in Afghanistan.

The ride is not just a fundraiser. It also serves to honour all 158 soldiers who gave their lives serving in Afghanistan. Each cyclist will ride in memory of two fallen soldiers, displaying a picture and biography on his or her bicycle.

The ride unofficially began in 2007 when one military member rode from Victoria to Comox with the aim of creating awareness of the foundation. Since then, rides take place annually in Nova Scotia, Ottawa and British Columbia. Over the years, the charity has helped improve the lives of people in Kosovo and Jamaica as well Afghanistan.

For more information, go to boomerslegacy.ca.

The Mustard Seed received a $8,500 cheque from the Vitamin Shop on Wednesday, thanks to the generosity of its customers and a national contest.

The health-food retailer matched dollar-for-dollar money donated by customers during February and March, raising $3,000. The rest of the funds came from Genuine Health, a natural health company that creates, markets, and sells nutritional supplements. Its Pay the Love Forward campaign challenged health-food retailers to come up with ways to give back to local communities.

“This donation will help many of Greater Victoria’s most vulnerable citizens through the services that are provided at The Mustard Seed,” said Jackie Cox-Ziegler, director of administration of the charity.

A recent sold-out concert by country crooner BK Morrison at the Royal Canadian Legion in Sooke raised about $2,500 for the Sooke Food Bank.

The cheque, presented last week, came at a good time. The food bank would have had to close its doors in July because of a lack of funds.