While most of the eight acres where Marigold Nurseries has operated since 1963 has been sold to local developers, the Smith family is still on site.
Katherine Dedyna Mar 13, 2016 6:00 AM

While most of the eight acres where Marigold Nurseries has operated since 1963 has been sold to local developers, the Smith family is still on site.

“We decided to do one more spring,” said Randy Smith, 31, noting the warm weather is making it open season for thousands of bedding plants, hanging baskets and hedges, among others. “There’ll be tens of thousands as soon as it gets sunnier.”

The last go round is a “bittersweet” experience, he said. “We’ve been doing it for so long. We’re putting all our energy into one more spring.”

Given the family’s well-publicized notice that the nursery was closing for good in December, Smith gets asked “about 40 times a day” why business is still blooming on the site.

The 18 greenhouses are empty, but the Smiths are leasing the retail area from Marigold Lands Ltd. developers Tim Hackett and Steve Mann for the short term, before Central Saanich decides on upcoming rezoning and development applications. They plan to be open seven days a week until the end of June.

The developers took over the lion’s share of the property on Jan. 15. On Tuesday, they will hold a community meeting on their plan for 200 units of affordable housing for the property, at Mount Newton Cross Road and Lochside Drive.

The first meeting, in December, underscored that the community wanted some assisted-living units, as well as a gathering space to have a coffee or buy necessities, in an attractive neighbourhood with high-quality design, green spaces and amenities.

“We have met with the district staff and have come to an understanding of what they will require,” Hackett said. “They are also very aware of what we are proposing.”

Central Saanich planning director Bruce Greig said no applications have been submitted but he expects feedback from the meeting will let indicate whether the proposal needs to be tweaked further.

The company has hired architect Franc D’Ambrosio, known for the master plans at Victoria’s Selkirk Waterfront and Mattick’s Farm in Saanich, to lead planning and site design as part of the rezoning and development permit process.

Hackett estimated it will take about three weeks to apply for rezoning. “We are hopeful that the rezoning will occur comparatively quickly, due to all the preliminary work that has been completed.”

Most of the property is zoned for a mix of commercial, garden, nursery and residential uses, while the north end is zoned single family. A rezoning would require a public hearing.

Mayor Ryan Windsor commended the developer for seeking so much feedback, but did not comment on rezoning prospects.

“That’s good on them — they’re following through on the process they said they were going to follow through on,” Windsor said. “That’s always a positive thing regardless of whatever we do going onward. … Obviously, it’s a large project in this neighbourhood that they’re undertaking”

The property is one of the largest on the Saanich Peninsula that is not in the Agricultural Land Reserve or owned by First Nations.

D’Ambrosio’s goals include to “stop urban sprawl, densify, find the correct balance to maintain quality and value while supporting transit use, walking and cycling and protecting valued agricultural and natural lands” he said in a statement.

“Properly done, we can allow for affordability, high-quality design of the correct scale with no erosion of the Agricultural Land Reserve.”

Once the Smiths vacate the site, Randy and sisters Rayanne and Brooke plan to open Marigold Nurseries — the Next Generation — elsewhere on the Saanich Peninsula. 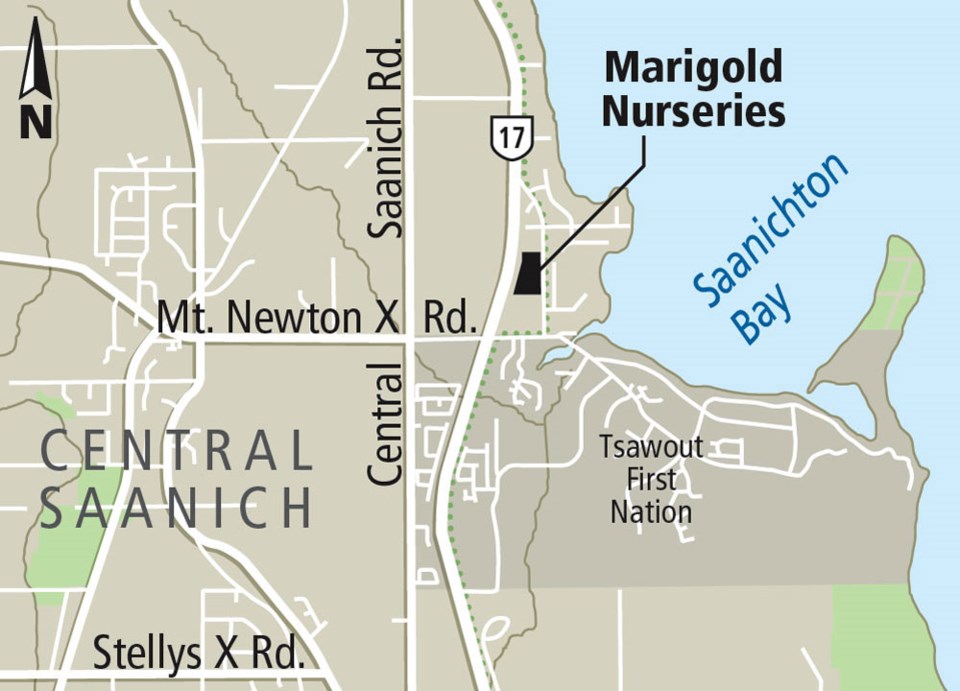