A popular campground on the west coast of Vancouver Island has been closed because of contamination by arsenic and other chemicals that probably came from an iron-ore mine that closed in the 1960s.
Judith Lavoie Mar 22, 2013 9:02 PM

A popular campground on the west coast of Vancouver Island has been closed because of contamination by arsenic and other chemicals that probably came from an iron-ore mine that closed in the 1960s.

The Toquaht Bay marina and campground, near Ucluelet, is a base for kayakers heading to the Broken Group Islands and can attract between 400 and 500 people during a summer weekend.
The marina, campground and boat launch are closed for further testing, which will take at least eight weeks. The province will then decide what cleanup and remediation is needed, said Forests Ministry spokeswoman Vivian Thomas.
“Recent testing in the area found arsenic, selenium and cobalt at levels that exceed the commercial and park lands standards,” said a joint statement from the ministry and the Vancouver Island Health Authority.

“The contaminant that is most concerning to health officials is arsenic. Arsenic is found in many minerals and can be poisonous in small doses or even fatal to humans.”

“If you or your children have been in the area very recently and you notice symptoms of illness, you should consult your doctor,” the statement said.

Fish and shellfish from the area should not be eaten.

Health risks aside, the 150-member Toquaht First Nation could lose employment and business. The band has run the campground and marina for eight years and took over the land on April 1, 2011, as part of the Maa-Nulth Treaty. Under the agreement, the province conducts environmental inspections and, if necessary, remediates contamination.

It is a relief that the province, not the band, will pay for the cleanup, said Gary Johnsen, Toquaht marina and campground director of business operations. “In terms of compensation, we hope there will be some consideration from the province.”

Thomas said it is too early to estimate costs or look at compensation.

“The first priority is to determine the extent of human health risks,” she said. “The province is working with Toquaht to find a mutually beneficial path forward.”

The province will likely look at the possibility of enforcing polluter-pays rules, she said.

Ironically, the beach sand that makes the campground popular is the material that is contaminated.

A brochure for the campground says the Brynnor Mine, near Kennedy Lake, was put into production in the 1960s by Noranda Mines. Ore was hauled to a crushing plant at Toquaht Bay.

“The fine sand left over from the crushing process was deposited at the water’s edge and slowly filled in the area … until the entire area was filled and formed a beautiful sandy beach,” it says.

The mine closed in 1968, but recent studies have looked at reopening it. 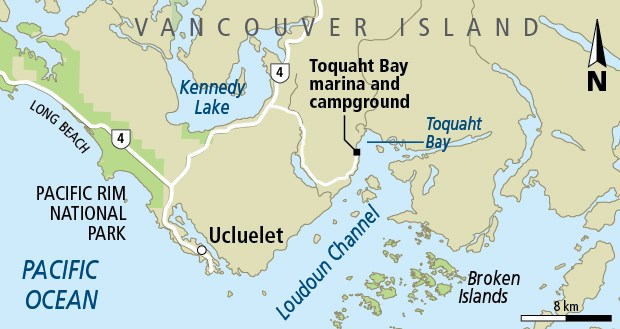