Pizza at Cafe Bliss. There's a vegetarian in our household (it's not the cat) and that's how I ended up at Cafe Bliss on a sunny Saturday afternoon. It's also how I'm ending up eating no-meat meals several times a week.
Phillip Jang Jan 24, 2010 2:55 AM

There's a vegetarian in our household (it's not the cat) and that's how I ended up at Cafe Bliss on a sunny Saturday afternoon.

It's also how I'm ending up eating no-meat meals several times a week.

Cafe Bliss, on Pandora near Government, serves raw food - none of it meat - in a variety of inventive and colourful forms. Much of it involves sending fruits and vegetables through a blender, or some other pulverizing device.

Eating here opens up a different perspective on food. Take, for example, their intriguing "pizza". It has a sturdy buckwheat crust topped with hummus, tomato, cucumber, olives, red onion, and spinach with a generous drizzle of something called smoked black pepper Brazil nut cream. Each bite offered an interesting, spicy, crunchy combination of flavours. I'd have it again, though it's a little pricey at $8. Eating the pizza can be challenging. That crust is definitely solid - in a good way. But I kept having visions of me cutting into the pizza and a big piece spinning into the lap of a fellow diner.

Cafe Bliss also has a variety of smoothies. We chose the special - January Sunshine. It's $7, but you get a generous portion.

January Sunshine is a blend of pear, orange, ginger and dates. As I slurped it through a straw from a mason-jar glass, something quickly became evident. This drink tasted like fruit. By contrast, the dominant taste in smoothies made at many other places is sugar, regardless of what flavour the smoothie is supposed to be. 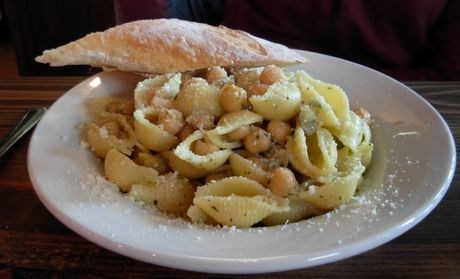 Shell pasta with pesto and chickpeas at Zambri's.

We also ended up at Zambri's, on Yates between Quadra and Vancouver. No meat again. My eating companion had the shell pasta with pesto and chickpeas. I had the spaghetti with garlic, olive oil and a sprinkling of cheese. They were both delicious dishes. Somehow, the folks at Zambri's  elevate simple food into something special. Because we arrived late for lunch - 30 minutes before their 2:30 p.m. mid-day closing time - there wasn't much on offer for vegetables. They usually have platters of vegetables as side dishes, for about $4 each. The two pasta dishes ended up costing $24, with tax.

I'm not sure what's up. But I'm about to say more positive things.

I've had a good run of restaurant meals this month, including what might have been the best vegetable tempura I've ever had.

For just under $6 at Futaba - on Quadra near Pandora - I was served a basket of battered eggplant, zucchini, onion, yam, carrot, and pepper. The tempura was hot, coated in a crisp, light batter. Tempura is often disappointing - arriving at the table lukewarm, greasy, with soggy batter. The Futaba version on this night was fabulous.

So, I'll struggle for a moment to come up with some criticism.

At Cafe Bliss - the chilly breeze swooping in from the front door prompted us to keep our coats on.

At Zambri's - the tables are really close to each other; fellow diners and staff can knock into you as you eat.

At Futaba - it took a while for the food to arrive, even though they weren't all that busy. But when it did arrive, it was worth waiting for.