Nanaimo Girl: Publicist shares memories of life among the stars

After several decades abroad, Nanaimo native Prudence Emery finally moved back to Vancouver Island in 2007. But the 83-year-old former film-industry publicist did not trade her starry social circles for her condominium in Oak Bay to fade quietly into black.

Emery used the quietude to write a page-turning memoir, Nanaimo Girl. “I wanted to call the book Death By Champagne,” Emery said — a reference to her once-lavish lifestyle, which orbited around swinging London in the late 1960s and the movie industry in the 1990s. “But the publisher insisted on Nanaimo Girl.”

Emery is a natural storyteller, which serves her well in Nanaimo Girl. Recently published by Toronto’s Cormorant Books imprint, the book covers Emery’s life to date, but really soars as she pinballs from 1957 to 1975 between Canada and England.

During one of her return trips to Canada, she worked with visitor services for Expo 67. Her post at the world’s fair in Montreal was to escort guests, including Liberace, Edward Albee, Hugh Hefner, Jack Benny and Twiggy. Her position put her in contact with national and international media, who clearly took a liking to her no-nonsense, can-do attitude and high-level efficiency.

She was hired as the press and public relations officer for London’s Savoy Hotel in 1968, and though she was only in the position for five years, her stories of the period are otherworldly. 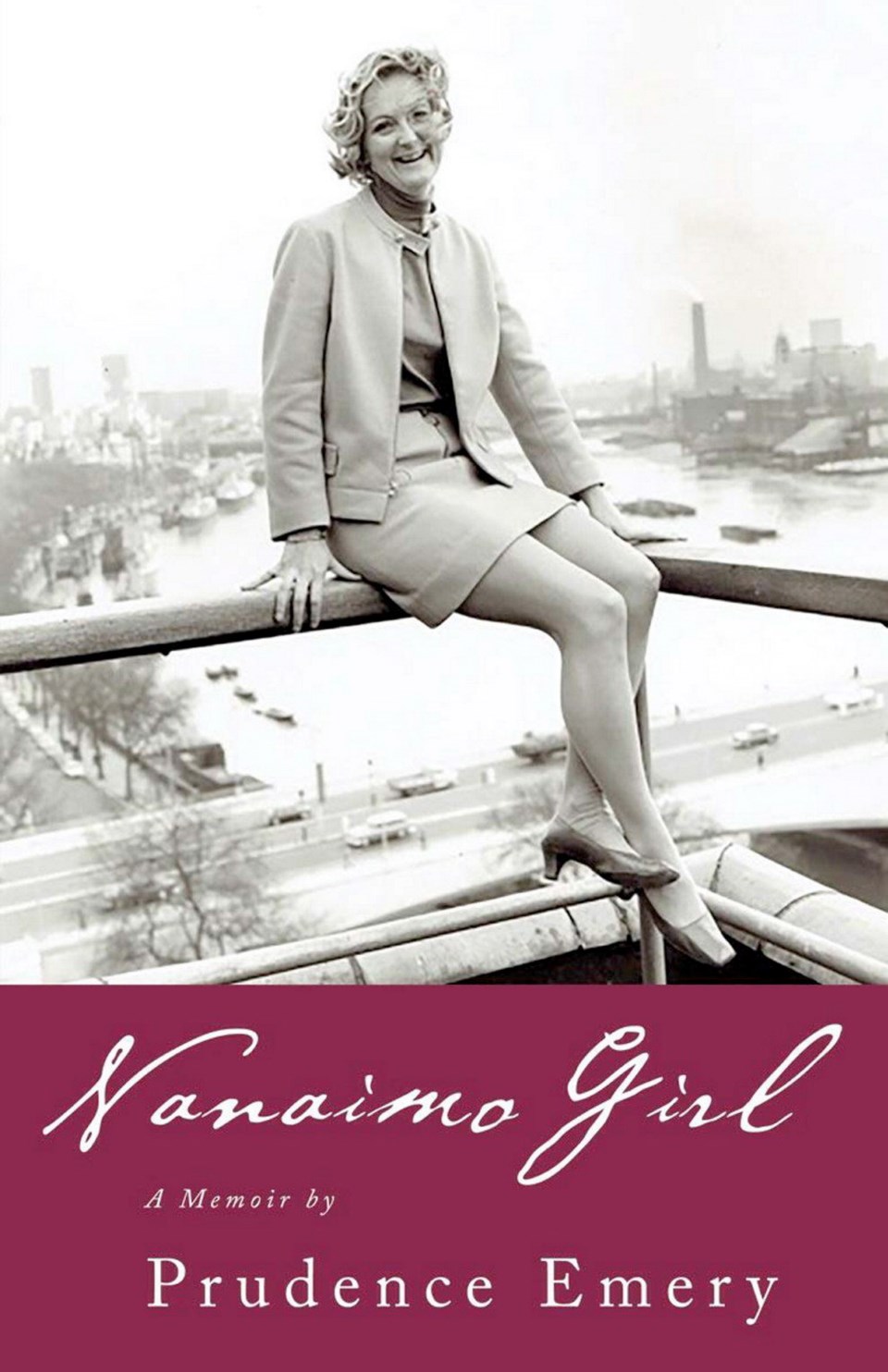 Among her many interesting asides were experiences with giants of the screen and stage, from a friendship with playwright Noël Coward to her task of organizing, with Liza Minelli, the actor-singer’s public engagement to actor Peter Sellers.

Emery also arranged for then prime minister Pierre Trudeau to attend the première party for Funny Girl, starring Barbra Steisand, whom Trudeau later squired. It wasn’t all wine and roses for Emery, however.

She moved in and out of relationships with everyone from Jean Charpentier, the Canadian journalist who later served as Trudeau’s press secretary, to the son of Russian composer Sergei Prokofiev.

Alcohol dependency became an issue during her time at the Savoy — champagne was her vice. But Emery came out of the fog and into a career as a publicist in the film industry, where she spent three decades working with another side of the cultural elite.

The pages of Nanaimo Girl feature photographs of Emery on set with stars of the era: Michael Douglas, Peter O’Toole, Bette Midler, Christopher Plummer, Jeremy Irons and Robin Williams. In conversation, Emery mourned the death of the “old industry,” where cast and crew would socialize together. “It was wonderful. It was like being in the film. Now, it’s much more corporate. I’m so glad I’m not in it anymore.”

Her career as an on-set film publicist began with the 1974 horror film Black Christmas. It was the first of more than 120 films she worked on between 1974 and 2010.

Ten of those films, on locations ranging from China to Budapest, were directed by David Cronenberg, for whom she has the highest of praise. “He’s hugely intelligent, but he has a very gentle demeanor. He’s not fey; he’s just rather low-key. He runs a set like a babbling brook. It’s kind of comforting.”

The last film she worked on was Cronenberg’s 2007 movie Eastern Promises, starring Viggo Mortensen, another Emery favourite. The completion of the film coincided with her move back to Victoria, where she had lived on and off for years following home bases in Toronto and Montreal.

She wrote and produced a movie of her own in 2013, Hattie’s Heist, but her days in the film industry are mostly a thing of the past.

“Moving here kind of took me out of circulation,” Emery said. “I guess it was a natural ending.”

There are a few actors whose company Emery did not enjoy, though she would only discuss them off the record. Nanaimo Girl wasn’t mean to be a tell-all, she admitted. But while she stayed mum on certain subjects, the memoir doesn’t skimp on details when it comes to her own upbringing.

Emery described herself as a “rebel with a cause” during her youth, a baseball-playing, jeans-wearing tomboy who explored every corner of the Island between Nanaimo and Victoria with her family in the 1940s. She lost touch with the area at various points, due to the demands of her job, but came to appreciate what she left behind when she returned permanently in 2007.

“When you’re brought up here, the landscape imprints itself on you. The mountains, the sea. And you don’t realize it. But then you come back, and think: ‘Wow, this is so incredibly beautiful.’ ”

Emery wrote the book over several years, with a painstaking eye for local detail. She had help from a treasure trove she discovered in her parents’ belongings, shoeboxes full of ephemera — including her mother’s Nanaimo bar recipe — and letters she had written during her travels. “I couldn’t have written the book without those letters. There is no way I could have.”

She has kept only select bits of memorabilia from her time in movies, as she donated much of it to the Toronto International Film Festival archives. She does have the memories in her head, however, and has come to trust what she experienced first-hand over what was written down in a movie press kit.

Her instincts were honed to a fine point over decades of experience. She had encounters with ingrates, to be sure. But her fond memories include time spent with raucous rockers Alice Cooper and Iggy Pop in the 1980s, which changed her perspective on the industry.

At first, she was wary of both. “I thought: ‘Oh my god, I’m going to be working with these guys, and they are going to be wild, how am I going to deal with this?’ But they both turned out to be the nicest, most down-to-earth, charming guys. I nearly died.

“Iggy Pop was doing an interview with The Globe and Mail and he was called to the set. I thought, ‘Well, that’s that.’ But he came back after on his own volition — he didn’t need to be dragged — and continued the interview. They were really amiable guys. It’s always a surprise. The ones you think are going to be terrific turn out to be dorks, and the ones you are nervous of turn out to be really cool types.”