It’s nearly time to start harvesting the first Atlantic salmon raised at a land-based fish farm on ‘Namgis First Nation land south of Port McNeill. Marketed under the name Kuterra, the fish are the product of the $9.
Carla Wilson
Mar 20, 2014 8:26 PM

Marketed under the name Kuterra, the fish are the product of the $9.5-million ‘Namgis Closed Containment Salmon Farm, aimed at being a leader in this kind of venture. “Ku” refers to Kutala, meaning “salmon” in Kwak’wala, and Terra is for the land-raised aspect of the project, which began last year.

Albion Fisheries Ltd. is taking the 600,000 pounds of fish that will be harvested regularly through this year, and is hoping for close to one million pounds in 2015, Guy Dean, Albion vice-president, said in an interview.

The salmon will be sold in B.C. through an agreement with a major supermarket chain, but Dean would not yet reveal the retailer’s identity.

Dean expects harvesting to begin late this month or in early April. After that, the fish will be taken to Albion’s new $10-million Richmond processing plant.

In March 2013, the first 23,000 smolts, weighing 100 grams each and supplied by Marine Harvest Canada, went into a tank at the farm. After a month, they graduated to larger tanks where they have been raised to market size, without pesticides or antibiotics, in water from an on-site well. It is fresh water but somewhat salty because of proximity to the ocean.

“It tastes like salmon, but we are finding it to have a milder, rich, buttery flavour,” Dean said.

Albion plans to send about 75 per cent of the salmon to the retail market, with the remainder going to high-end restaurants, he said.

There’s been interest in buying the salmon from elsewhere in Canada and from the U.S., he said.

Kuterra CEO Garry Ullstrom is bullish on the project, aimed at creating an environmentally friendly, sustainable and profitable business for the ‘Namgis First Nation.

The ‘Namgis people hope the project will help foster more land-based fish farms and encourage aquaculture companies to move away from net pens in the ocean.

Financial details are confidential but he said a “healthy profit” is expected. The long-term goal is to reach the profit level seen with net-pen farming.

Ullstrom would like to see lower capital costs for the land-based system and said they will be looking into ways to make money from farm waste. He hopes for government incentive money for innovation.

Marine Harvest examined raising more fish on land for human consumption, “but has decided against it due to concerns of cost [capital investment and power], environmental footprint [groundwater use] and animal welfare [higher stocking densities].” 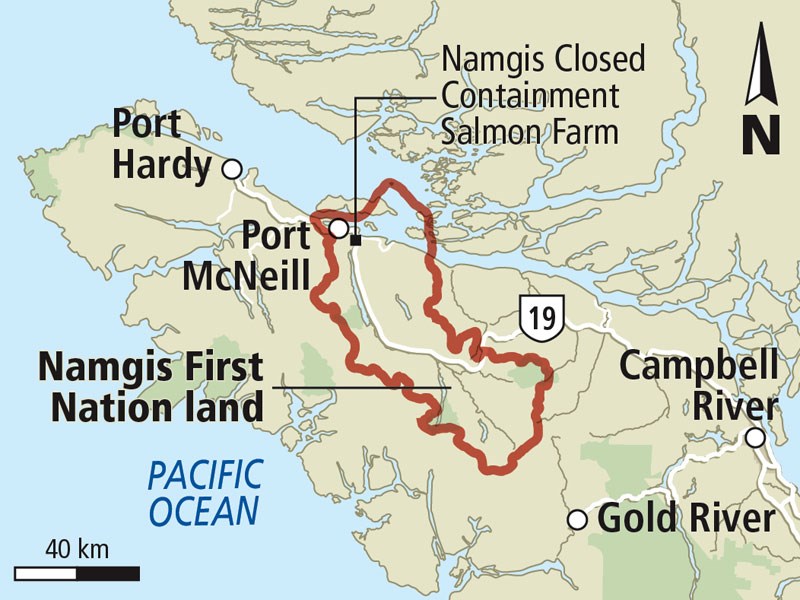