Promoters are hoping there is room to accommodate more electricity from their wind-power projects on the B.C. grid
Derrick Penner
Aug 10, 2014 7:44 AM

To the west of Port Hardy on northern Vancouver Island’s windswept tip, the Cape Scott Wind Farm’s 55 80-metre-high turbines are churning away at the sky, delivering electricity to British Columbia’s power grid and fuelling the hopes for growth in this segment of the renewable-power sector.

It is the newest of a handful of wind farms generating something close to two per cent of the power that B.C. Hydro distributed to British Columbians last year, but that is up from nothing just five years ago.

And at a time when the world’s attention is focused on renewable energy versus fossil-fuel generated power, B.C.’s wind-power promoters are hedging that there is room to accommodate more electricity from their proposed projects on the provincial grid, even if BC Hydro says it isn’t in the market for more renewable-power generation right now.

Much of the hope in B.C. is contingent upon the development of a liquefied natural gas export sector that is keen to defray some of its impact on greenhouse gas emissions in the province, by buying renewable power if not to power the energy-intensive liquefaction process, at least to power ancillary equipment.

A decade ago, Manson said, a major study said the constant winds off B.C.’s north coast and in the province’s Peace River region make the province a “top place for economic wind energy.”

Manson noted that B.C’s wind patterns counter those of the Columbia River Gorge in the U.S. — the only other nearby region to adopt wind power in a significant way.

In B.C., the winds peak in winter; on the Columbia they blow strongest in the summer. Manson said that makes them naturally complementary as a stable source of renewable power.

Underpinning that, Manson said, B.C. Hydro’s large storage dams for hydroelectricity offer a “perfect match” to back up wind farms when the wind isn’t blowing.

“So you have all the ingredients for a really robust industry,” Manson said. 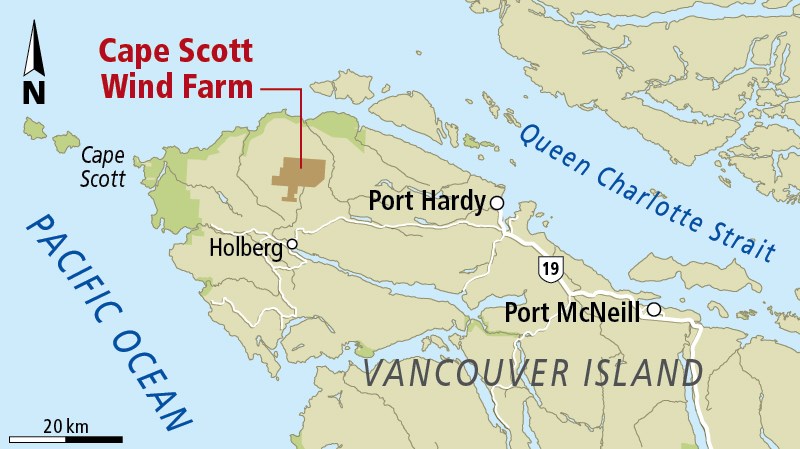 However, wind power remains a hard sell in a province built on a legacy of cheap hydroelectricity and considerable public resistance to having the public utility, B.C. Hydro, sign more contracts with independent power producers at higher prices than they can see on the open market.

“The challenge of wind is (that) it does come on and off,” said Chris O’Riley, BC Hydro executive vice-president, generation. While the amount of wind at a location is consistent over the season, it varies considerably from hour to hour, O’Riley noted.

“You have to be able to back it up with a firm resource, which we have in the form of our hydro capacity, so it’s a good mix.”

He added that Hydro is satisfied so far with the Cape Scott facility, which is performing as per the terms of its power purchase contract with the facility. The farm is now owned by GDF Suez Energy North America, a subsidiary of the global IPP and pipeline operator GDF Suez Group, which bought it from Sea Breeze.

It is also a welcome addition to the energy mix for Vancouver Island, O’Riley said. B.C. Hydro only generates about a quarter of the region’s electricity needs on the Island.

“It’s good to have some generation at the north end (of Vancouver Island), because they are at the end of a long line up there.”

O’Riley said the four wind farm IPPs providing power to B.C. Hydro add up to about 500 megawatts of generating capacity, which is about five per cent of the utility’s overall capacity. However, accounting for the variability of when wind blows, they only generate about one to two per cent of the province’s power supply.

With an additional four wind farms under construction by independent-power developers, that is set to rise marginally to about four per cent within the next few years.

But whether B.C. Hydro contracts to buy more will depend on future needs, driven largely by whether LNG producers build their plants.

However, B.C. Hydro has been cool of late to the idea of adding power from new IPPs to the grid, regardless of the source.

A year ago, the utility estimated in its latest integrated resource plan that it could meet B.C.’s electricity needs for the next 10 years, between additions from the Hydro-owned generating stations that it is refurbishing and IPP projects under development, and it didn’t need to put a call out for new proposals.

As part of that, government announced plans to jettison or delay up to 19 its existing IPP contracts for proposals not yet under construction. And the utility hasn’t put out a new call for proposals from IPPs since 2008.

O’Riley added that BC Hydro does see the need to establish new electricity sources “as we get into the early 2020s,” related resource development in mining, oil and gas and the nascent LNG sector, which should open up new opportunities for IPPs, including wind producers, to bid on.

O’Riley said they’ve committed to doing that interim review in the fall of 2015 when they have more answers to LNG questions.

“What you need to do when you’re planning a system like this is keep a balance between firm, flexible resources, like you get with a large hydro plant, like a Site C, and renewable, intermittent resources,” O’Riley said.

However, the utility has a mandate under the Clean Energy Act to make sure whatever power sources it adds keep the province’s electricity supply 93 per cent renewable energy, including wind and run-of-river hydroelectricity.

“The problem with (power) that’s renewable, by and large except for large hydro, is that it’s intermittent, which is a significant deficiency,” said Jim Quail, an energy lawyer and formerly staff council to the Canadian Office and Professional Employees Union Local 378, which represents BC Hydro workers, and the B.C. Public Interest Advocacy Centre.

That makes renewable power “economically low-value” energy, Quail said, but comes with higher prices in B.C. compared with the cheap power from BC Hydro’s legacy dams that have largely been paid off.

Quail added that a downside in using B.C. Hydro’s dams to backstop wind power is that “to some extent, how you use them depends on what’s happening with your intermittent resources.”

If B.C. Hydro needs to hold reservoir water in storage to generate electricity when the wind doesn’t blow, for example, it can miss opportunities to sell power on the open market when market prices are higher.

Or, Quail added, another downside is the risk of strong winds blowing at a time BC Hydro doesn’t need the power from wind farms.

He noted that this is a problem with a lot of B.C.’s run-of-river IPPs that generate most of their electricity during spring run-off periods, when B.C. Hydro’s reservoirs are full to overflowing.

That was the case in the spring of 2012, a high run-off year, when B.C. Hydro kept several of its power plants idle while it bought electricity under its contracts with run-of-river IPPs. This happened at the same time utilities up and down the coast were awash in hydroelectricity and there was no market for B.C. power.

And in 2011 and 2012, wind-power producers on the Columbia River ran into a conflict with the Bonneville Power Authority over its hydroelectric facilities when both were generating peak power at the same time.

“It does force you to operate whatever it is you’re using to back up (renewable power) sub-optimally,” Quail said.

However, conditions keep shifting for wind producers. An oversupply of equipment from manufacturers in China, where utilities are investing massively in wind and solar electricity, has dramatically brought down the capital cost of wind power.

And engineers keep improving the efficiency of turbines, said Mike O’Conner, CEO of Nai Kun Wind Energy, which means new equipment can generate more electricity at lower speeds than in the past.

O’Connor’s company has a proposal for a 110-turbine, 440-megawatt wind farm off the east coast of Haida Gwaii that has an environmental permit from the province but no power purchase agreement with B.C. Hydro.

He added that the company is looking for private-sector customers for the power, including LNG plants, which, for the most part, plan on burning natural gas to power their natural-gas liquefaction equipment.

However, O’Conner is hopeful that LNG proponents will be interested in offsetting at least some of their emissions by taking on power from projects like Nai Kun.

“It is an iterative journey,” he said. “First the LNG folks have to proceed. If they don’t happen, I don’t think our project happens in the near future.”