Parents and grandparents have for several decades prioritized saving money for education costs through the Registered Education Savings Plans (RESP). These can be opened as soon as a child or grandchild is born and the application for a social insurance number has been received. As education costs have increased, planning for post-secondary education became an integral component of financial plans.

What has not been an integral part of many parents’ financial plans is how to assist their children in obtaining the financial knowledge and resources to buy their first home. In some cases, parents do not have the financial resources; however, guidance with knowledge can go a long way. Housing affordability is becoming more and more of a concern. Coming up with the 20 per cent down payment (all at once) can be a far greater financial hurdle than funding education costs.

The government has implemented a few changes to assist with housing affordability. These changes are outlined in Bill C-32, which received royal assent On Dec. 15, 2022. We feel that if parents and children take advantage of both new programs and older programs, there is a far greater probability of purchasing a first home.

Bill C-32 introduced a new type of registered account called the First Home Savings Account (FHSA) that will enter into force on April 1, 2023. It will take financial institutions time to create the systems for the new FHSA and it is anticipated that this will be designed at some point in 2023. In our opinion, every person who is serious about purchasing their first home should learn about the FHSA. To give a brief overview of the criteria:

• You need to be a resident of Canada

• You can’t own a home at any time in the year the account is opened or during the previous four calendar years.

With the FHSA, the contributions will be tax deductible. This is especially advantageous the higher your income is. Other than the RRSP-HBP exception, withdrawals from an RRSP are taxable as you received the deferral/deduction for originally putting the money in.

Withdrawals from a FHSA are tax free provided it was used to purchase a qualifying home purchase. The FHSA and TFSA can each grow in value and all the growth is also tax free.

The two components that will be variable for people contributing to a FHSA are the level of taxable income and the time that the FHSA remains invested. Rushing to open a FHSA in a non-taxable income year may not be the most strategic move — we will explain below.

Tax deductions and tax-free deferral is especially good for individuals who have higher taxable income. If taxable income is not high, some strategy will still need to be factored in when making FHSA contributions.

If you know that you will be buying a home for sure within the next five years, then strategy is not as important — just contribute to the FHSA. If you feel that it will be longer than five years, and your taxable income is soon to be increasing, then using strategy makes sense. This is especially the case if you have not already maximized your Tax Free Savings Account.

For example, a person that has savings from past years, is 22 years old and in university currently earning no income. A FHSA can be opened, and a contribution made; however, the tax savings is $0 for the contribution. Deferring income is not as important as there is no taxable income to begin with.

A person that is making $40,000 per year and puts $8,000 into a FHSA will have tax savings of approximately $1,605 and will benefit from not having investment income taxed at a marginal tax rate of 14.16 per cent.

A person that is making $80,000 per year and puts $8,000 into a FHSA will have tax savings of approximately $2,256 and will benefit from not having investment income taxed at a marginal tax rate of 28.20 per cent.

A person that is making $200,000 per year and puts $8,000 into a FHSA will have tax savings of approximately $3,694 and will benefit from not having investment income taxed at a marginal tax rate of 45.80 per cent.

A person that is making $240,000 per year and puts $8,000 into a FHSA will have tax savings of approximately $4,280 and will benefit from not having investment income taxed at a marginal tax rate of 53.50 per cent.

Essentially, the higher your taxable income, the greater the benefits a FHSA will be.

Many are of the opinion that the sooner you can get into real estate the better. Others may feel strategically picking your time may result in a better purchase price. Below we have put two illustrations that excludes the tax savings from putting the funds in and deals solely with the time factor.

To illustrate the earliest schedule where the $40,000 contributions are maximized, along with a six per cent rate of return, and then pulled out of the FHSA (with qualifying purchase) at the end of the fifth year:

To illustrate the longest schedule where the $40,000 contributions are maximized, along with a six per cent rate of return, and then pull out the funds at the end of the 15th year: 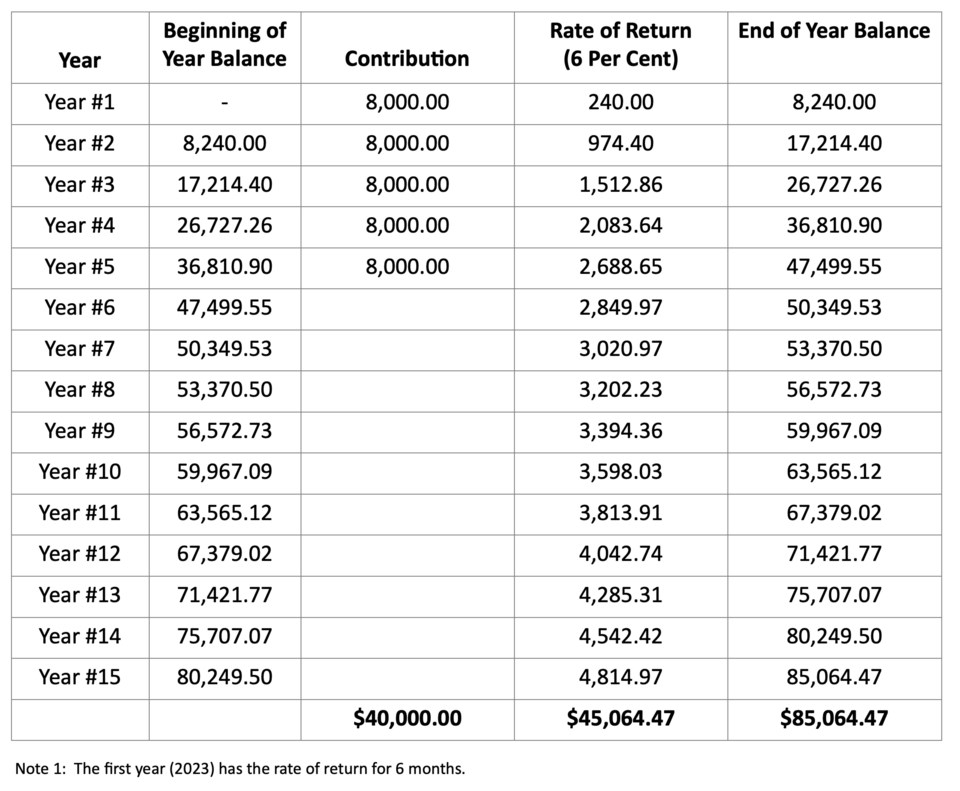 Although the end of year balance is greater in the second illustration, the timeline is based on each person’s individual circumstances. By starting a FHSA at age 19 you are putting a timeline of having to purchase a home by age 34 for sooner. Many people have not purchased a home until after the age of 34. An FHSA must be wound up by December 31st of the year an individual turns 71. Working backwards, a person who is 56 years old could start a FHSA and get the full 15 years deferral provided they purchased a qualifying home at age 71. If a FHSA is opened after the age of 56 then the maximum time frame the account can be opened is limited to age 71.

There are many situations where a person may have owned a home previously but currently do not. We have had clients that went through a separation, decided to travel for a couple of years, or whatever the reason — today they don’t own a house any longer.

In an early reading of Bill 32 we noted that individuals had to make a choice to either participate in the RRSP-HBP or the FHSA — they could not do both. First-time home homebuyer had to choose which program they wanted to participate in. This naturally had some objections. With revisions, this was removed, and homebuyers now will not have to choose — both can be used together, which makes total sense.

With the RRSP-HBP first-time homebuyers can withdraw up to $35,000 from an RRSP to buy a home. Any withdrawals that are taken from the RRSP-HBP must be repaid to an RRSP over the next 15 years, starting the second year following the year in which the withdrawal was made. The FHSA has advantages over the RRSP-HBP because you get to make a deductible contribution and funds can come out tax-free without any future repayments.

If one can only afford to contribute to either the FHSA or RRSP — the FHSA would be the first choice. All RRSP contributions should be done in the context of your overall taxable income, and other savings account contributions, especially if purchasing a principal residence is a financial goal.

Individuals that were born in 1991, or earlier, could have contributed up to $88,000 into a TFSA. All growth within a TFSA is tax free when these funds are pulled out. The liquidity of the TFSA is great in the sense that if funds are pulled out you can replenish the account in the future.

Above we have talked about how some people should consider a TFSA over the FHSA if income is nil/low and the time horizon for purchasing a home is beyond five years. If taxable income is high, and cash flow permits, doing all programs (FHSA, TFSA, and RRSP-HPB) is the best option.

The TFSA enables income to be tax sheltered and has the ease of liquidity, without tax consequences, to pull the funds out when a house is purchased.

Taking advantage of all

If you have the financial resources, or assistance from parents, you can take advantage of all the programs – for many this is the ideal situation. A couple may each take advantage of the above programs towards the purchase of the same house. This is a key planning component as it essentially enables couples to double all the amounts noted above. 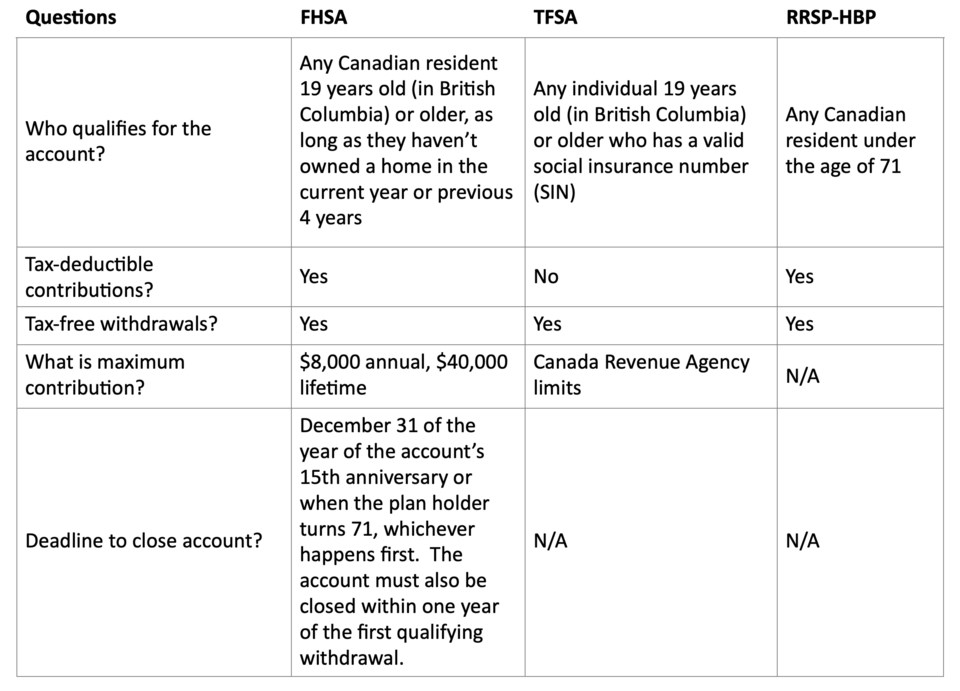 A couple of addition points regarding the above chart. After making a withdrawal from an FHSA to purchase a home, an individual will be required to close the account within one year and will not be permitted to open another FHSA. This is a one-time opportunity. If funds are removed from the FHSA for any reason other than for a qualifying home purchase, taxes will be owed. Ensure any contributions can be committed to the desired goal of purchasing a home.